Fringe Festival: "Underneath the Lintel" by Pat O'Brien's Vanity Theatrics at the U of M Rarig Center Arena 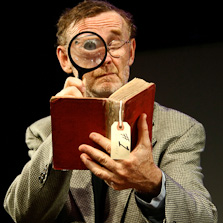 Underneath the Lintel is a beautiful, funny, profound one man show about a librarian who goes on a quest to investigate a long overdue book, which changes his life forever.  The man in question is TV and film vet Pat O'Brien, who gives a remarkable performance.  From the moment he walks onstage (about ten minutes before showtime, setting up a table, chair, and a few props), he creates a character so specific and real you believe he's a real person.  He's a stereotypical librarian - nervous, fastidious, precise.  He lives in an orderly world where nothing ever happens, until one day he finds a book that's over 100 years overdue in the night return slot.  The book is a travel guide filled with clues that get him to leave his small town in the Netherlands and travel the world.  A cleaner in London, a train in Germany, a P.O box in China.  He presents the "evidence" he has collected, all neatly numbered and labeled as a librarian would do.  When the clues lead him back hundreds of years, he begins to suspect that the man he is chasing is the mythical wandering Jew, condemned to wander the earth, never resting, never dying.


The librarian gets more and more agitated as his scavenger hunt leads him further and further down the road.  He takes a week's sick leave from his job and is gone for months.  When he finally returns to the library, he's fired.  Everything he knew and loved about his life is taken away and he's faced with an existential crisis.  Does the wandering Jew exist?  And what does that mean about life?  About God?  About why we're here?  Is life just Hobson's choice - no choice at all?  Underneath the lintel (which means doorway or entrance way) refers to the little choices we make that profoundly change our life, and we don't even realize it until much later.

In an afterword written by the playwright Glen Berger, he writes, "in the face of overwhelming existential bewilderment and terrible suffering, to respond with a little defiant dancing (in all its myriad forms) is a very human and very wondrous thing."  As is this play.
See all of my Fringe reviews.