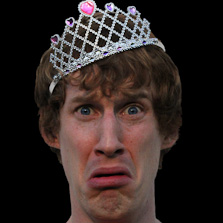 When I saw the title Disney Dethroned: Snowcahontas and the Tangled FrogBeast on the list of Fringe shows, I was intrigued.  But it wasn't until I recognized the name Tom Reed that I knew I had to see it.  I've seen Tom as his alter ego, the smooth and smarmy Lounge-asaurus Rex at Sample Night Live, and as the naive college graduate/puppet Princeton in Mixed Blood's sweet and silly and wicked production of Avenue Q earlier this year.  Smart, funny, quick-witted, and possessing a better voice than a funny man should, I knew he'd be a great host in this evening of skewering everything Disney holds sacred.

Disney Dethroned is a hilarious spoof of Disney princess movies.  You know the story: the princesses are taught to be cute and find a man to marry, the princes are chauvinistic and controlling jerks, the fathers are dead and the mothers are mean (or vice versa).  The show consists of five parts, with two well-known princess stories mashed together in each to form a loose and nonsensical plot ("it's Disney, don't think too hard").  Tom plays all the roles, from our heroine "Princess Disney," to the evil queen, to the fairy god-mama-genie, to Walt Disney's frozen head.  He transforms into each character using only his facial expressions (see photo above), his voice, and the carriage of his body.  He also sings a few re-inventions of Disney songs, including a song I memorized as a teenager and can still recall word for word, The Little Mermaid's "Part of that World."  Only in this version, Princess Disney explains that stars are just balls of hydrogen and can't hear your wishes or make them come true!  (How's that for reality check?)  The seven dwarves, or something like them, make an appearance, including Elmo, Gimli, and Pawlenty.  There's also a rap from the original creators of most of Disney's fairy tales, the Brothers Grimm.  Actually they're not really the creators of the stories, they just "wrote stuff down."

This show is funny, smart, silly, and a lot of fun.  Not only is Tom a talented improv comedian (his resume includes the Brave New Workshop), he also has a great voice.  He's not just joke-singing, he can really sing.  In fact if I have one complaint about the show, it's that he didn't sing enough!  (But I'm a musical theater nut, so I can always use more singing.)  This was the longest line and most packed house of the five shows I've been to so far, so it might be wise to order tickets before you go.