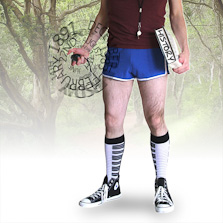 History Camp is a really wonderful show.  Smart, funny, and silly, it's something I've never seen before - a completely a cappella musical!  As much as I love a pit orchestra or an on-stage band in a musical, an a cappella musical is a pretty cool idea.  One that's wonderfully executed by Late Night Menu, creators of last year's infamous Fringe show (which unfortunately I haven't seen) Zombie High School.  This year's offering is about a camp where historical figures compete for a chance to go back and live their lives over again.

Camp counselor JR welcomes eight historical figures to the camp.  Emily Dickinson is not very happy to be outside, but Amelia Earhart is excited about everything.  Ferdinand Magellan is in his element, while William Shakespeare is above it all.  The boys and girls retreat to their separate cabins where Marilyn sings to the girls about showing them "What You Got," while the boys sing about "Glory" in beautiful four-part barbershop quartet style harmony.  The cast goes on a series of expeditions, competing for the "time travel badge" which will allow one of them to return to their life.  As thing suspiciously go missing, they accuse each other until they begin to realize that "JR" isn't who he seems to be.  In the end they join together for the greater good, having become fast friends at History Camp.

I'm having a hard time singling out anyone in this cast, they were all so great in their diverse roles, and their voices blended beautifully.  Anna Weggel's Amelia Earhart got laughs every time she opened her mouth and spoke in an enthusiastic and hilarious accent, sort of early 20th century East Coast.  Her rivalry with Katia Cardenas's Joan of Arc was amusing as well.  Troy Zimmerman (who also directed the show) was the charming and motivating counselor JR, until he turned menacing.  Andrew Berkowitz wrote the music and lyrics and also played Harry Houdini, in love with Emily Dickenson.  The songs were original and fun with great harmonies.  And without an orchestra to provide cues and back-up, the singing flowed seamlessly out of the dialogue.  I don't know why a cappella musicals aren't done more!

This was my last Fringe show this year.  I was just hoping to stay awake through the 10 pm show, but I ended up being delighted and entertained (even if I did stifle a few yawns which had nothing to do with the performance).  It was a great end to a wonderful first experience at the Fringe Festival.  I'm already looking forward to next year's fest and thinking about how I can fit in even more shows.  If Late Night Menu has a new offering (or even a reprise of Zombie High School), it will definitely be on my must-see list.
See all of my Fringe reviews.