"Sunrise at Midnight" by Taous Claire Khazem at Dreamland Arts 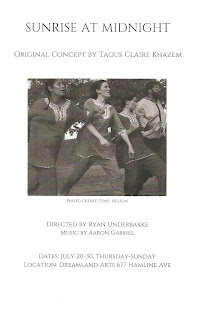 One of the things I most appreciate about theater is the opportunity to learn about cultures different from my own. Where else am I going to experience Algerian folktales? #TCTheater artist Taous Claire Khazem* has brought the folktales of her father's native land right here to St. Paul, and recruited some of her fellow artists to tell the stories in an inventive, engaging, and movement-filled way. Sunrise at Midnight can be seen for eight performances only at the charming and intimate Dreamland Arts, and the performance I attended was sold out (or very nearly), so act fast to catch this unique theater offering (info and tickets here).

Sunrise at Midnight tells three different stories based on Algerian folktales, interwoven together. One about a brother who left home and found a magic flute in a fish; one about a man who married the girl of his dreams, brought her back from the dead, and then returned her there; and one about a prince who married the most beautiful girl in the world and was cursed by her father. A creepy old man appears out of the bushes in all three stories, offering the protagonist a choice which often leads to undesired results, like a promise from the devil. The folktales, while specific to the Kabyle people in northern Algeria, feel familiar and share similar themes and motifs with folktales and legends told in cultures around the world.

Directed by Ryan Underbakke, the five-person cast (including creator Taous Claire Khazem, Transatlantic Love Affair company member Heather Bunch, Sandbox company member Theo Langason, Nora Montañez, and Mohammed Yabdri) tells the story with movement and physicality, and sometimes almost seems to move as one. This style makes the story more dynamic and alive, and easier to track various characters and stories through specific character choices. Everyone in the cast is incredibly playful, open, and expressive as they tell these stories that range from silly to tragic.

Between each story and sometimes within them, the cast sings or hums tunes based on the traditional Kabyle style, with occasional accompaniment on guitar, percussion, and flute (original music by Aaron Gabriel). Costumes are (I assume) traditional Algerian costumes, and look like the comfiest pajamas that allow for ease of movement and provide a blank slate for the characters and stories.

At a brisk 60 minutes at an intimate space on a charming street in St. Paul, Sunrise at Midnight is a lovely and fascinating journey into the world of these traditional folktales, that most of us would never otherwise be able to visit. Playing through July 30.


*Read an interview with Taous by my colleague Kendra at Artfully Engaging.