"Joseph and the Amazing Technicolor Dreamcoat" at Artistry 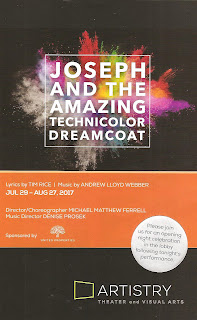 When I heard Artistry was opening their 2017-2018 season with Joseph and the Amazing Technicolor Dreamcoat, I thought, "Why?" Why are they doing this frequently produced show now, and why do I need to see it again when I've seen it so many times (the Chanhassen alone did it seven times in three years, or was it the other way around?). But I did go, and I'm thrilled that I did because this is a Joseph and a Joseph unlike any I've ever seen before. The familiar score and story are seen through a new and different lens. Direction, choreography, staging, set, costumes, music, casting, and performance all contribute to the most inventive production of Joseph and the Amazing Technicolor Dreamcoat I've ever seen. It's pretty far out, and if you're an Andrew Lloyd Webber traditionalist, you may not be pleased. But I dug it. Read on to find out why I did, and why you might too.

Here are ten reasons to see Artistry's production of Joseph, a show I once called "a fun romp through slavery and famine":

For the other Fringers out there, I know this is a busy time, but the show continues a few weeks past Fringe, and is barely longer than a Fringe show itself so could possibly be squeezed in during the Fringe. I don't think most of Artistry's usual audience is too concerned with the Minnesota Fringe Festival, so hopefully many people will see this fresh, modern, crazy Joseph and the Amazing Technicolor Dreamcoat (playing through August 27).


*I don't know if it's a coincidence, but #TCTheater saw back-to-back productions of Andrew Lloyd Webber biblical musicals with African American leads (see also the Ordway's recently closed Jesus Christ Superstar). I like it! For more on the ideas of representation, diversity, and inclusion in #TCTheater, check out the Twin Cities Theater Bloggers' monthly event called "Continuing the Conversation" (next one scheduled for August 28 at Sandbox Theatre).