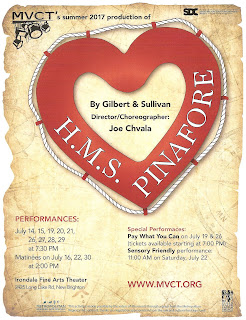 Friends, support your local community theater! In the beautifully rich theater community that is #TCTheater, there is a ton of great work being done in high schools, community centers, churches, and other locations around the Twin Cities metro area. Most of which I don't get to see because I'm too busy seeing work by the 70+ professional theater companies. But lucky for me, my local community theater is Mounds View Community Theatre, which does a musical every summer. And lucky for all of us, the director of this year's selection, the delightfully silly Gilbert and Sullivan operetta H.M.S. Pinafore, is one of the Twin Cities' best director/choreographers Joe Chvala. I saw the show on their closing weekend and was absolutely delighted by it from start to finish. Joe Chvala's energetic and dynamic choreography combined with this amazingly talented and hard-working cast of "amateur" performers and designers, not to mention all the behind the scenes volunteers, adds up a whole lotta joy and rapture for this audience member.

H.M.S. Pinafore, or, The Lass That Loved A Sailor, takes place on ship somewhere off the coast of England in the late 19th Century. A Captain reigns over a crew of sailors, one of whom, the bright and earnest Ralph, has fallen in love with the Captain's daughter Josephine. She has also fallen in love with him, but is betrothed to Sir Joseph, "the ruler of the Queen's navy." Ralph and Josephine decide to marry despite the difference in their stations and her father's disapproval, when a long-held secret is revealed that turns the situation on its head. It's a whole lot of silliness that allows for many great songs with Gilbert and Sullivan's trademark repetitive pitter-patter lyrics*, all performed remarkably well by this large cast and 10-piece orchestra. A Gilbert and Sullivan score is not easy, but they pull it off beautifully thanks to the music direction of Blake Brauer (who, with his beard, man-bun, and expressive conducting is almost as fun to watch as what's happening on stage).

I've seen a few of the cast members in previous MVCT shows or on various stages around town, but most were new to me, and all of them impressed me with their talent and enthusiasm. Hazen Markoe is just a delight as the pompous Sir Joseph. Michael Dufault ably portrays the (not so) good Captain of the Pinafore. Brandyn Tapio is a true triple threat as Ralph Rackstraw, with a lovely voice, charming portrayal, and good dancing skills as one of the main sailors. Grant Hooyer provides the comic relief as the creepy Dick Deadeye, his lanky frame so bent over I hope he has a good physical therapist or yoga instructor for post-show recovery. Our Josephine, Anna Maher, sings like a nightingale and cries and wails like the most annoying teenager in love. Mary Palazzolo is a hoot as the most important of the sisters, cousins, and aunts (or at least she thinks so). I'm happy to see Mari Holst (MVCT's Cinderella a few years ago) again, who continues to be a really strong performer as Buttercup. All of the sisters/cousins/aunts are wonderful as they tiptoe around the stage in their big dresses, and the sailors are all fantastic as they keep up with Joe Chvala's trademark tapping, percussive, body-slapping choreography, which must be almost as much fun to perform as it is to watch.

The look of the show is really fun too. Set designer Robin McIntyre (who has designed for many stages around town) has created a bright yellow ship's deck with a second level and a sitting room area that pops out for just one scene. Masts and ropes complete the nautical look and allow the sailors to have some fun climbing around. The sailors wear sharp white suits, but it's the women's gorgeous gowns that really impress. Costume designer Cindy Forsgren has given each of the many sisters, cousins, and aunts a different detailed bustled dress, with a matching hat and parasol!

Everything about this show just made me happy in the way that only musical theater can do - a wonderful cast, a clever and intricate score well-performed, bright and colorful sets and costumes, and dancing! Oh joy, oh rapture! H.M.S. Pinafore ends its run this weekend, but check out what's playing in your community.


*Plot summary borrowed from what I wrote about the 2015 production by the Gilbert and Sullivan Very Light Opera Company.