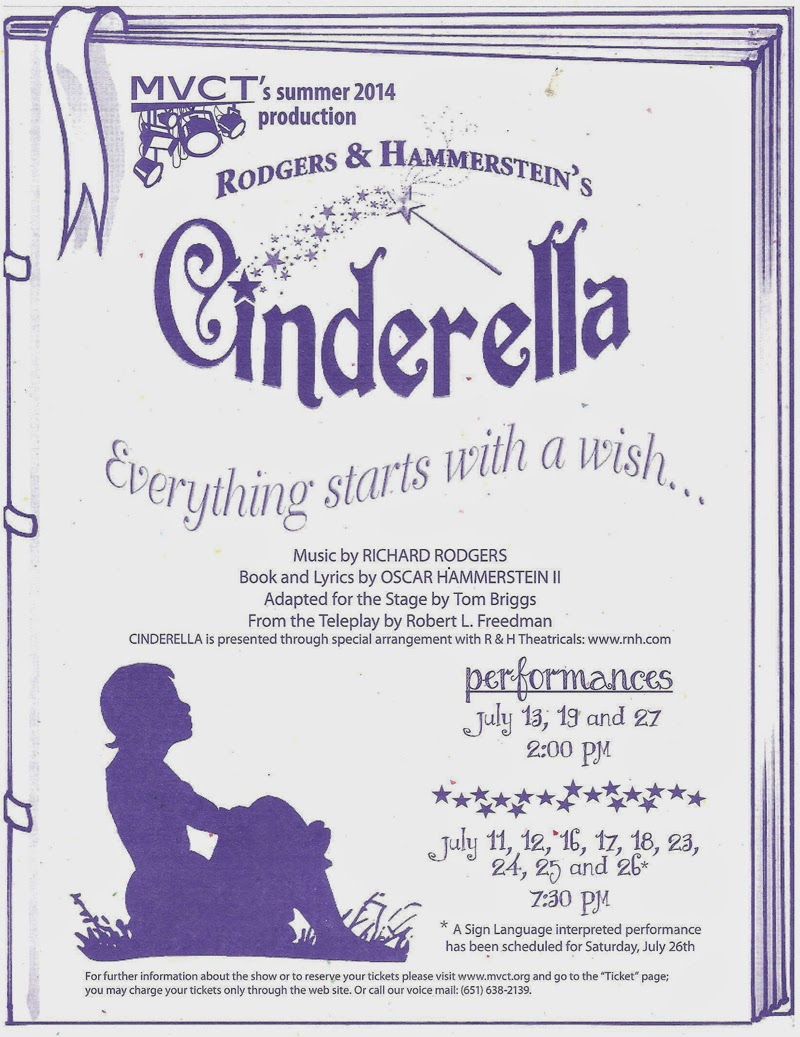 There are dozens of community theaters in the Twin Cities metro area performing at high schools and community centers. In this relatively quite summer theater season, I decided to check out my local community theater, which is Mounds View Community Theatre, now in their 31st season. I heard great things about their production of Les Miserables last year (which I missed, in part, because I knew I was going to see a spectacular production at BCT in the fall), so I was curious to check out their production of Rodgers and Hammerstein's Cinderella this summer. Unfortunately the stormy weather interfered with my plan to bike to nearby Irondale High School, but it was still a fun thing to do on a summer afternoon. The show is quite charming and adorable with several standouts in the cast. Moral of the story: get out and support your local community theater!

The musical Cinderella is unique in that it was written for TV (originally airing live in 1957, starring Julie Andrews), and only arrived on the Broadway stage last year with a rewritten book (and starring Minnesota native Laura Osnes). It tells the familiar story of the poor, hard-working, good-hearted young woman who wins the love of the prince and escapes her unhappy home to live happily ever after. I'm too old and jaded to believe in fairy tales, but even I couldn't help but be caught up in the magic of the show. The set and costumes are bright and colorful, with two-dimensional pieces designed to look like Warner Brothers cartoons, which creates an appropriate fantasy-like world. The Cinderella dress transformation is done simply and effectively and creates a moment of awe and wonder. (Set design by Robin McIntyre and costume design by Cindy Forsgreen.)

As Cinderella, Mari Holst is truly the star of the show. She just shines onstage, with her beautiful voice and natural, charismatic stage presence (plus, I love a princess with short brown hair - take that Disney!). She's well-matched by Mason Henderson as Prince Christopher (really? Christopher?); they sound beautiful together. Other standouts in the cast include Haley Garland as the Fairy Godmother and Anissa Lubbers and Erika Sawyer as the very funny stepsisters. The ensemble does a fine job, and the littlest members of the cast are the most enthusiastic and fun to watch. And, as always, I was thrilled to see and hear a large live pit orchestra (ah, if only I hadn't given up the clarinet!).

It was fun to see so many kids in the audience. Community theater is an easy and relatively inexpensive way to expose children to theater at a young age, both as audience members and performers. If you're in the Mounds View area, go check out Cinderella, playing through July 27. If not, go see your local community theater. A couple of examples: Minnetonka Theatre is doing Mame and Spelling Bee (and they're also hosting Tony winner Karen Olivo, who now lives in Wisconsin, in an auditioning workshop), and Chaska Valley Family Theatre is doing the comedy Laughing Stock. Theater is everywhere - check your local paper or community bulletin board to find it.