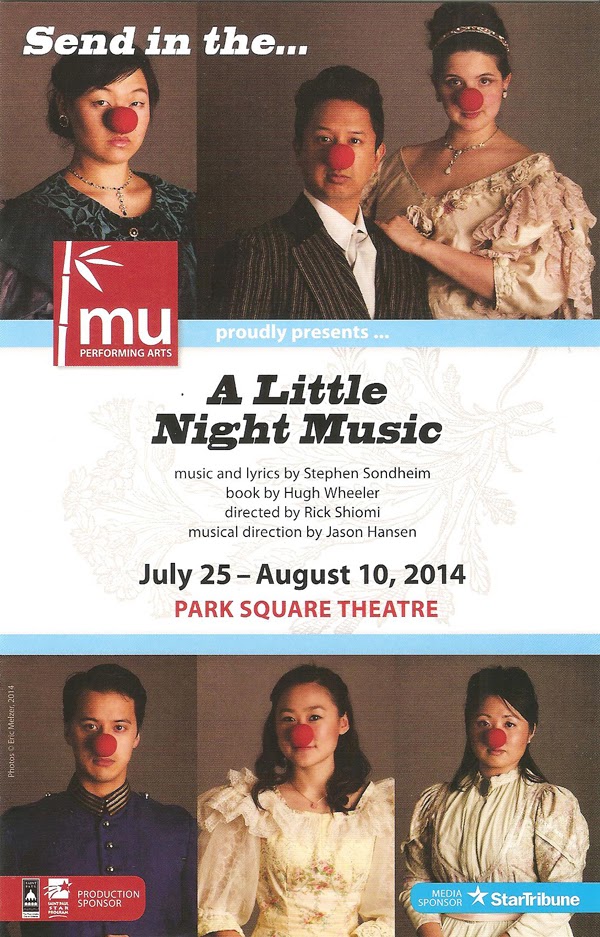 A few weeks ago I wrote that the Guthrie's My Fair Lady is the must-see summer musical. Correction: it's one of two. Mu Performing Arts' production of Stephen Sondheim's A Little Night Music should also be on your must-see list; it's every bit as good as My Fair Lady. The songs might not be as "hummable and quotable," but they're clever and beautifully complex in a way that only a Sondheim score can be. The music sounds gorgeous, the costumes are luscious, the show is funny but a little sad too, and the cast is fantastic (and by the way, they also happen to be Asian-American). It's another gorgeous production of a classic.

Set in Sweden at the turn of the last century, the 1973 multi-Tony-winning musical A Little Night Music is a story about love, loss, regret, and second chances. Desiree is a glamorous actress who has left her teenage daughter to be raised by her mother in the country. Her former lover Fredrik walks back into her life after seeing her in a performance and wants to rekindle their relationship. But there's a complication. Well, several complications. Fredrik has a new young wife Anne, who has so far refused to consummate the marriage. And his son Henrik is in love with her. Desiree has a married lover, who's very jealous and possessive of both his wife and mistress. When the entire group is invited out to Desiree's mother's house in the country, much hijinks ensue, as you can imagine. Lovers meet and break up, hearts are broken and repaired, and everyone has a lovely, if bittersweet, time. This is a comedy, almost a farce, but one with an undercurrent of sadness, longing, regret, and weariness of life.

The show is so beautiful and elegant, beginning with the onstage six-piece orchestra, which sounds gorgeous playing this gloriously complex and stunning music. Sondheim is not easy to pull off, but under the direction of Jason Hansen, these musicians and singers do so flawlessly. Musical highlights include the first act closer "A Weekend in the Country," the solos "Now," "Later," and "Soon" which combine to become an intricately layered trio, and of course, the sad and beautiful ballad "Send in the Clowns." The music is accompanied by subtle and lovely choreography by Penelope Freeh.

The cast is just perfection, under the direction of Rick Shiomi (and they look gorgeous in the gowns and tails designed by Lynn Farrington). There's Randy Reyes (Mu's Artistic Director) with his usual charm and humor as Fredrik, the always delightful Suzie Juul as the bubbly innocent Anne, Wes Mouri as the tortured and in love Henrik, Alex Galick as Desiree's pompous lover, and Lara Trujillo as the wise grandmother who has lived long and learned much, and isn't afraid to share it. And then there's Sheena Janson, who so perfectly conveys Desiree's wry humor and realism, but also shows her vulnerability and longing for something deeper. Sheena's rendition of "Send in the Clowns," a song that has been covered by everyone from Bing Crosby to Olivia Newton-John, is a thing of heartbreaking beauty. The leads are backed by a wonderful ensemble, especially the sort of Greek chorus of five singers that wander through the show, sometimes commenting on the action, sometimes singing the characters' songs back at them. They even move set pieces gracefully.

It's become a bit of a summer tradition with Mu to cast a classic American musical with Asian-Americans (see also: Little Shop of Horrors and Into the Woods). It gives these wonderful actors a chance to play roles that they otherwise might never be cast as, and they absolutely flourish in the opportunity. It's a beautiful thing to see. Head to downtown St. Paul between now and August 10 to see a beautiful production of a classic Sondheim musical (discount tickets available on Goldstar).