"Dr. Jekyll and Mr. Hyde" at the Minnesota Centennial Showboat 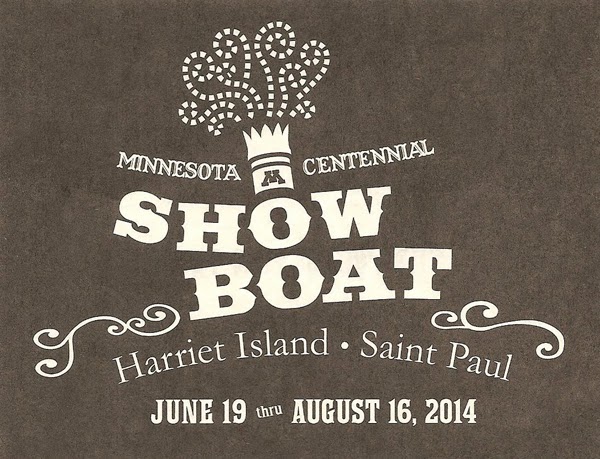 The University of Minnesota produces summer shows at the Minnesota Centennial Showboat, a permanently docked historic boat on Harriet Island across from downtown St. Paul. This is my first year attending, and it's great fun. Stepping onto the Showboat is like stepping back in time, as student actors in costume greet you and show you to your seats in the charming on-board theater. The show is usually a melodrama, and they encourage audience reaction in the form of cheers and boos. This year's show is Dr. Jekyll and Mr. Hyde, played to deliciously campy effect by the young, talented, and enthusiastic cast. It's truly a delightful and fun evening of theater on the river.

In this version of the well-known tale of the man with two very different sides, the handsome and sophisticated Dr. Jekyll is engaged to the lovely Agnes Carew when her mother is murdered by a stooped and scary man named Mr. Hyde. An inspector investigates the murder, with all signs pointing him towards Dr. Jekyll's residence. Agnes thinks that her betrothed is protecting the man that killed her mother, but only Jekyll knows the truth, that he and Hyde are one in the same, and he can only control the transformation with a drug that he cannot find. He has withdrawn from Agnes to protect her from his evil side, but the truth eventually and tragically comes to light.

The cast, under the direction of Peter Moore, plays the melodrama to the hilt and appears to be having as much fun as the audience. Katherine Fried is a delight as Agnes, with her wide eyes and expressive face. Christian Boomgaarden is so convincing as the suave Jekyll and demonic Hyde that it's hard to believe it's the same person, with transitions happening ever more quickly as the (melo)drama increases. Bear Brummel is charismatic as Jekyll's friend and confident, who also happens to be in love with Agnes.

Dramatic scenes are interspersed with musical olios, directed by Vern Sutton and accompanied by "master of the piano" Anton Melnichenko, who also provides a constant soundtrack to the action. The olios are all silly and fun and well performed; highlights include Tori Smith's gift-giving dilemma "I Dunno" and the gentleman singing about a beauty for each month, with the ladies parading in ridiculously elaborate costumes and headdresses. Speaking of, the costumes (by Matthew J. LeFebvre) are quite beautiful and add much to the show, especially impressive when some only appear onstage for a few minutes. The sets (by Rick Polenek) consist mostly of two-dimensional backdrops on the tiny stage, which look quaintly old-fashioned, and provide a bit of humor when the cast pretends they're three-dimensional.

The summer theater season can be a little quiet, but the Showboat is a great option for some fun, light, summery entertainment in a lovely spot on the river. Assuming the flooding season is over, shows continue through August 22 (Goldstar discount tickets are currently sold out, but check back in case more are added).