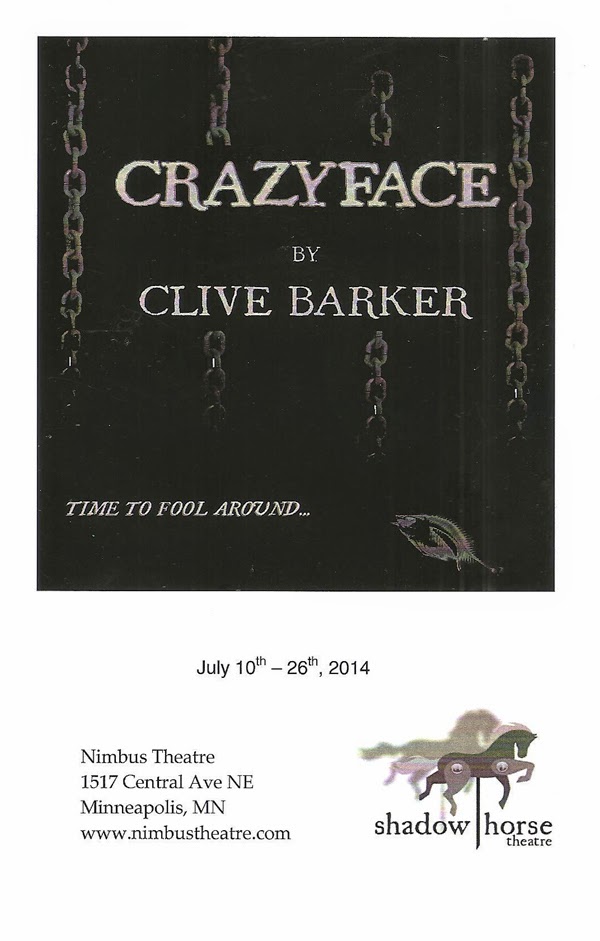 Wow, I don't know where to start with this one. Clive Barker, who is mostly known for writing and directing horror films (of which I am not generally a fan), has also written plays, including the epic mess Crazyface. Shadow Horse Theatre's ambitious production is not without redeeming qualities, including a darkly beautiful aesthetic and some fine performances, but this is a play that could use some editing. At three hours long with dozens of characters, including some who show up and then leave, never to be heard from again, it mostly just left me perplexed at what I just saw.

Set in medieval Europe, Crazyface tells the story of a fool who goes by that name. He is on the run with his mother, who loves him dearly, and the three wives of his brother, also a fool, but a much darker one. Crazyface is visited by an angel, who is really more of a devil, and because of this is not accepted by society. This was a time when people who were different than the norm weren't just bullied, they were hung. But Crazyface is actually the most sane and sympathetic character, it's everyone around him who's scary in the way that they treat him. Crazyface leaves his family to wander around the countryside, encountering many strange characters, and eventually finds himself in possession of a secret box that everyone wants (you won't believe what it contains!). The evil Mengo sends Crazyface's brother Lenny, whom he is keeping captive and torturing for some unknown reason (think Ramsey Bolton and Reek), to find and kill Crazyface. But Crazyface, who is not as foolish as he appears, survives to return to his mother. Lots of other weird stuff happens, but that's the gist of it.

Andy Schnabel as Crazyface is a wonderful centering force through this strange maze, and makes this fool someone to root for and believe in. Derek Meyer is charismatic as the angel/devil on his shoulder, Matt Saxe is chilling as Mengo, and Matthew Kelly is the scariest as Lenny. Lots of other actors play lots of other characters that I had a hard time keeping track of, but they managed to, with the help of the period costumes by Barb Portinga. The simple set (by Theresa Akers) is dominated by a huge twisted tree trunk, upon which the angel perches, and a church that's shaped like a coffin.

If you're a fan of horror films and weird macabre storytelling, you might want to check this one out. Playing at nimbus theatre in Northeast Minneapolis through July 26 (discount tickets available on Goldstar).