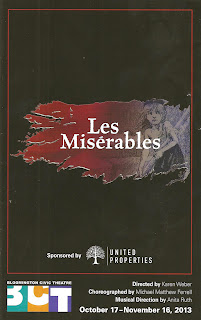 I'm not one of those Les Mis fanatics. I first saw it on tour over a dozen years ago, and what I remember most about it is that it was really long. I liked it well enough to buy the soundtrack, which I listen to periodically; the score is gorgeous and includes some wonderful songs. But I've never really connected with it like I have other musicals (I'm more of a RENThead). That changed a little when I saw the movie last year, but that too felt long and a little exhausting. But after seeing Bloomington Civic Theatre's new production of Les Miserables, I finally see what all of the fuss was about. It does not feel long or tedious; every moment is completely engaging. The music soars in the hands of this talented cast of singers and the big gorgeous pit orchestra (Anita Ruth has written some new orchestrations to replace the synthesizers, adding bassoon and guitar and doubling some instruments), and the themes of redemption, forgiveness, and love are so compelling. I've seen just about every musical production at BCT for the last few years and I always enjoy what they do, but Les Miserables is the best thing I've seen there so far. It's absolutely thrilling.

In case you're unfamiliar with the theater juggernaut that is Les Miserables, here's a quick primer. The musical premiered in London in 1985 and arrived on Broadway in 1987, and became one of the longest running musicals in both locations. Based on the 19th century novel of the same name by Victor Hugo, it follows the life of Jean Valjean from the release from his 20-year imprisonment for stealing food, to his involvement in the French Revolution, and many points and characters in between. Always on the run from Inspector Javert, Valjean tries to make a good life for his adopted daughter Cosette while struggling with his past. As director Karen Weber (who went back to the original text to inspire the tone of this production) writes in a note in the playbill, "It is a sprawling morality play, set against a tumultuous period in French history. That setting illuminates and encapsulates the suffering and oppression of generations of the French people, the human spirit crying for an end to that suffering, and the desperate measures taken to end it."

One of the reasons I was so excited to see BCT's production of Les Mis is the cast. As anyone who's read this blog with any regularity knows, I'm a big fan of Dieter Bierbrauer, and have been since I saw him play Tony in West Side Story at the Chan years ago. I will see him in anything (even a musical that takes me back to the 80s, my least favorite decade), and I love seeing him in iconic musical theater roles like Jean Valjean, the troubled hero of Les Miserables. In addition to Dieter's typically perfect vocals, this is a very physical performance as he transforms from a young man beaten down by years in prison, to a respected businessman, to an aging man who walks like he's lived long and suffered much (but can still easily sling a young man across his shoulders). He carries the character's suffering in his body and his voice. "Bring Him Home" is a highlight, so beautiful and heartfelt. I didn't think anything could top hearing Dieter sing "Being Alive," but this just might have.

Of course Dieter is not the only star in this show. There are so many characters who have great moments in song, and BCT has chosen the perfect actor for each one. William Gilness is a great adversary as Inspector Javert, strong and unmoving in his goal to find Valjean, until Valjean shows him mercy and he is unable to process it and doesn't know how to go on with life. Laurel Armstrong beautifully embodies the tragedy of Fantine. The talented Aly Westberg is an incredibly sympathetic Eponine, another tragic character, and her "On My Own" is another highlight. Riley McNutt has a strong voice as Marius, with Molly Jo Hall as his lovely Cosette. Carl Shoenborn and Sally Ann Wright are entertaining as the comic relief innkeepers. Dominique Wooten is magnificent in a scarlet jacket; his cries to war make me want to climb a pile of rubble and wave a red flag! From the oldest to the youngest, this cast brings these characters to life. In a post-show discussion, Karen said that she told her cast that it's not enough to sing beautifully (as they are all capable of doing), but they also need to tell the story in a compelling way. Mission accomplished.

Once again, Michael Hoover designed a functional and appropriate set. Stairs to a balcony provide many levels on which Karen effectively places the action. A rotating center piece allows set pieces to enter and leave the stage smoothly, most effectively the barricade in the second act. As it spins we see both sides of the barricade. Costume designer Ed Gleeman has dressed the cast in period clothing both desperate and opulent.

Les Miserables is such an inspiring story. Through a moment of kindness, a man's life is changed and he goes on to affect others' lives by passing on that kindness. But through it all he's still just a man, with doubts and regrets and struggles. In short, it's the human experience. I see a lot of theater, and it's not often that I'm moved to a standing ovation (in fact sometimes I resent it when everyone stands up and I'm obliged to follow). But this is one of those times when I was eager to stand up and applaud and show my appreciation for all the work that went into creating this marvelous theatrical experience. Les Miserables is playing at BCT through November 16, get your tickets now before it completely sells out! (If you have no plans for Halloween, discount tickets are available on Goldstar.)