"Fiddler on the Roof" at Chanhassen Dinner Theatres 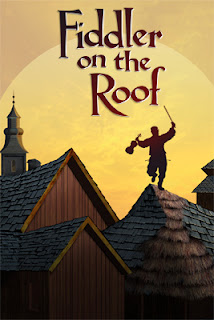 Chanhassen Dinner Theatres' new main stage musical Fiddler on the Roof feels like a bit of a change from recent fare. The last few shows (Joseph, Bye Bye Birdie, Xanadu) have been very high energy, fun, almost campy musicals. It's been quite a while since I've had a tear in my eye at the Chanhassen, but I did on Friday night. Tevye, the main character in Fiddler, has such love for his family, his traditions, and his village that when those things begin to be broken apart, you can't help but be moved by it. Don't get me wrong, there's still plenty of humor and great dancing (although of a different kind than the usual Broadway style), but this show has more of a deeper meaning and serious undertone that we've seen recently at the Chan. But what hasn't changed is the excellent cast of regulars (and a few newcomers) directed by Michael Brindisi, the fantastic onstage orchestra led by Andrew Cooke, and the high production values. This is a great production of one of the most popular musicals of the last century.

The 1964 musical Fiddler on the Roof is based on late 19th century stories by Russian Jewish writer Sholen Aleichem. Tevye is a poor and simple man with strong belief in his Jewish faith and traditions. He believes in doing things the way they've always been done, which means arranging marriages for his five daughters. But it's 1905, and the times, they are a-changin'. Oldest daughter Tzeitel wants to marry a man of her choice, a poor tailor. Despite the fact that Tevye has arranged for her to marry the wealthy (and much older) butcher, he gives in to Tzeitel. It's obvious that the girls have their papa wrapped around their little fingers and he would do (almost) anything to see them happy. In the struggle between tradition and his daughters' happiness, his daughters win. Second daughter Hodel moves further away from family tradition when she agrees to marry a man not from the village, a scholar and political activist who gets arrested and sent to Siberia, with Hodel to follow. Third daughter Chava goes a step too far when she wants to marry outside the faith, a Russian man named Fyedka (but he's one of the "good" Russians). It breaks Tevye's heart to do so, but he cannot accept this gross breach of tradition and the seeming rejection of the faith he holds so dear. But these are not the only problems poor Tevye is dealing with; 1905 Russia was not a welcoming place for Jews. Facing religious persecution and pogroms, Tevye and his family are forced to leave and find a new home. It's a sad ending, but there's also a feeling of hope that this family will stay together and continue their traditions, as well as begin new traditions, wherever they find themselves.*

At the heart of this production is Keith Rice as Tevye. He's long been one of my favorites at the Chanhassen, often hamming it up in a comedic role (such as his recent turn as the Pharaoh in Joseph), but this is the best I've seen him. He still plays the comedy in Tevye's friendly kvetching about his troubles as he talks to God (and the audience) like an old friend, but there's great heart there too. Keith possesses a beautiful rich baritone with which he can bring down the rafters, but he shows incredible restraint in "If I Were a Rich Man," pulling it in and making it a sort of conversational rumination on a daydream. Michelle Barber is a good match as his wife Golde, and they share a comfortable chemistry, especially in the sweet song "Do You Love Me?" The three daughters are well cast; they're charming, strong singers, and embody the different personalities of the girls (Serena Brook, Ruthanne Heyward, and Caroline Innerbichler). Also great and well cast are the men playing their suitors (Zachary Colton Schaeffer, Jared Oxborough, and Tyler Michaels**). The large ensemble provides great support, and Mary Sue McDonald is the titular Fiddler, who seems to represent Tevye's soul, always there at important moments. 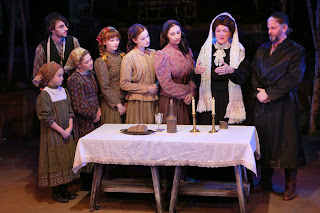 The costumes (by Rich Hamson) are excellent and authentic-looking, and I couldn't help but think how hot the actors must be under the layers of coats, shawls, skirts, boots, hats. A fortunate story element - according to tradition everyone must keep their heads covered - eliminates the need for unflattering wigs. In addition to the muted everyday wear, there's also an opportunity for fun and colorful costumes in a fantastical dream sequence. The choreography (by Tamara Kangas Erickson) features some thrilling Jewish and Russian-style dancing, and the well-known score includes such favorites as "Tradition," "Matchmaker, Matchmaker," and "Sunrise, Sunset."

I wasn't that familiar with Fiddler before seeing this show, having never seen the entire 1971 movie and only having seen it onstage once before (pre-blog, which means I don't remember much about it). I found it to be a great musical about faith, family, tradition, resilience, and community. Head out to Chanhassen between now and February for something to warm your heart (and stomach - some great new menu items) this winter.


*If you want to know what happens to Tevye and his family upon immigrating to America, go see Theater Latte Da's Steerage Song, a new music-theater piece about the European immigrant experience in the 19th and early 20th centuries.
**Tyler Michaels is playing the role of Fyedka through Dec. 8, at which time he leaves the show to play the emcee in Theater Latte Da's Cabaret.