"Uncle Vanya" at the Guthrie Theater 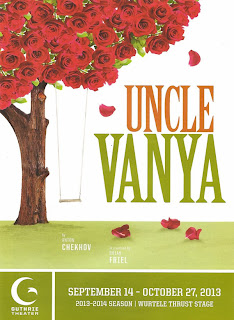 Since I'm a Guthrie season subscriber (this is my 11th season), I just go when they send me, which for Uncle Vanya happened to be in its final week. There was not a big crowd on Tuesday night (I think the opening of the fantastic Tribes has overshadowed it), but those who were there seemed to enjoy it, including me. I've never seen a Chekhov play (not counting a production of The Seagull over 20 years ago of which I have zero recollection, even though it was my first ever Guthrie show), and honestly when I think Russian literature my first reaction is... ugh. But a few minutes into the show I realized Uncle Vanya is not at all intimidating or fomidable or dry; this adaptation by Irish playwright Brian Friel is a very accessible telling of a bittersweet story, a mixture of laughter and melancholy. With a charming set and the usual fantastic cast of Guthrie favorites and a few newcomers, I found it to be quite enjoyable - a bittersweet, melancholy, funny, thoughtful, and insightful play.

Set in late 19th century Russia, Uncle Vanya tells of a group of relations living on a country estate. Sonya (Emily Gunyou Halaas) and her Uncle Vanya (a charmingly befuddled Andrew Weems) work the estate that she inherited upon her mother's death years ago. Her ill and aging father Alexander (Robert Dorfman) has returned to the estate with his new young wife Elena (Valeri Mudek), and has plans of his own. Also living at the estate are Vanya's mother Maria (the legendary Melissa Hart, making the most of a small role), the nanny (Barbara Kinsley, so memorable in August: Osage County at Park Square a few years ago, here creating another distinct character), an eccentric family friend nicknamed Waffles (the always fantastic Jim Lichtsheidl), and occasionally the town doctor (John Catron, with another great drunken scene). It's a diverse group of characters who interact with each other, having conversations in small groups or alone on stage, talking directly to the audience.

Not a lot happens in the play; it's more of a study of life through these characters. The doctor is an environmentalist and talks about the destruction of the forests and the ecosystem in a way that has become scarily real in the 100+ years since the play was written. Poor Sonya is blissfully in love with the doctor but he's completely unaware of her. Everyone falls in love with the married Elena; she leaves many broken hearts in her wake but is not unsympathetic herself. Alexander mourns his exciting life as a famous professor that is now largely behind him, and Vanya struggles with the drudgery of every day life with no excitement or happiness. The play ponders such ideas as: What does it mean to be happy? Why are some people destined to live happy and full lives while others don't? Why do some women have all the men fall in love with them while others must toil away on the family farm? No clear answers, but we must endure!

The charming set was designed by Michael Hoover (who seems to be the busiest and definitely one of the best set designers in town); it looks like a life-size dollhouse. Three different rooms in the house are distinctly created in exquisite detail - the front porch, a living room, and a bedroom. Two of the sets are split in two and move in from either side to join in the middle. It's a delight to watch.

Uncle Vanya closes this weekend, so you only have a few more chances to see this lovely production of a classic. I'm looking forward to seeing the final play in the Guthrie's 2013-2014 next summer - the recent Broadway hit Vanya and Sonia and Masha and Spike, a sort of modern twist on Uncle Vanya. That's some pretty clever season programming.