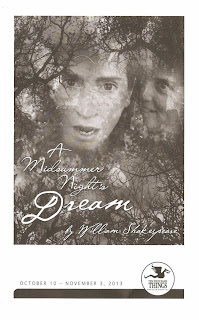 A Midsummer Night's Dream is perhaps the wackiest of Shakespeare's romantic comedies. It's the one where lovers chase each other through a forest, a group of actors rehearse and perform a preposterous play, and a woman falls in love with an ass (a literal not figurative ass, the latter is nothing unusual). This makes it a great choice for the superb theater company Ten Thousand Things to bring to their typical venues of prisons, homeless shelters, community centers, and other places and people usually lacking in the joy that theater can bring. TTT's version features an ethnically diverse cast and a few gender changes (Lysander is played by a woman and referred to as she), as well as men playing female characters and women playing male characters. None of this interferes with the story (all you see are eight wonderful actors playing many different characters), and perhaps makes it so that everyone finds someone or something to relate to. I always love seeing Ten Thousand Things shows to witness the true craft of theater without any distractions that a big fancy production can bring. In a fully lit room, the actors look you in the eye and simply say and feel and live the words of the play. It's theater at it's most basic and true.

A Midsummer Night's Dream continues at Open Book through November 3. You can never go wrong with a TTT show, and this is a fun new take on a classic.