"Disenchanted" by Casting Spells Productions at the Ritz Theater 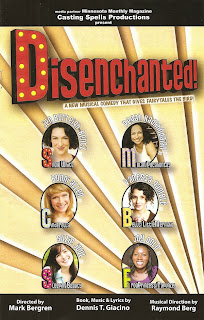 If watching a Disney princess movie has ever left you feeling let down, betrayed, dismayed, frustrated, or downright pissed, Disenchanted is just the cure you need! In this new musical comedy by Dennis T. Giancino, the Disney princesses are allowed to tell their true stories about what living in a Disney fairy tale is really like, and what happens after the "happily ever after." Featuring catchy and melodic tunes, clever and funny lyrics, and a stellar cast, it's a really fun and fantastic 90 minutes! But hurry - there are only six performances left at the Ritz Theater!

The host of the evening is the sharp and bitter Snow White (a dynamic and commanding performance by Jen Burleigh-Benz), like you've never seen her before. Her back-up princesses are the ditzy Cinderella (a very funny Bonni Allen) and Sleeping Beauty (the always delightful Suzie Juul, with a voice as clear as a bell). They introduce us to the "P.C." problem - the princess complex - in which girls are taught they need to be pretty, simple, and obedient while they wait for their prince to come and save them. These princesses will cure you of that notion! Mulan (Pegah Kadhodaian, excellent in this and her second role as Pocohantas, a historical figure turned pin-up girl) makes an appearance and tells us "maybe I'm a lesbian" since she's the only princess who doesn't get the prince. Rapunzel is an angry German princess who won't accept her Disney transformation, and the Frog Princess is "the princess that's finally gone black" (Joy Dolo in both roles). We also meet an insane Belle and a drunken Little Mermaid (a scene-stealing Vanessa Gamble). The princesses lament about body image, dieting ("All I Wanna Do Is Eat" is a highlight), housework, and the commercialization of their image. In the end they declare that those days are "Once Upon A Time," and they're finally free to be themselves!

Friends, this is a really great show. Fun and original, turning fairy tales on their head, sung in solos and gorgeous harmonies by six talented women, tongue in cheek, a cast that's so comfortable in their roles and with each other, Ivey-winning Music Director Raymond Berg in perfect musical conversation with the cast, costumes by A. Emily Heaney that are a modern take on princess attire (my favorite: Snow White's dress!), performed in a kitschy old theater, and only 90 minutes long so it's short, sweet, and to the point, leaving you wanting more rather than outstaying its welcome. Catch it this weekend while you still can!