"What's A Ocean? And Other Valid Question from Minnesota Girls" at Bryant Lake Bowl 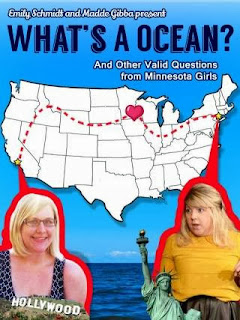 I'm a Minnesota girl, but unlike Madde Gibba and Emily Schmidt, I've never wanted to live anywhere else. These two local theater/comedy artists have recently moved to the East and West Coasts, respectively, to find their fortunes. But they still have strong roots in and love for their home state, and returned for a one-night-only performance of their new sketch comedy show What's A Ocean? at the Bryant Lake Bowl.* And even though comedy is not my main interest (I'm in too deep with the theater scene to go too far into the comedy world; I do like to have one or two nights off a week), I really enjoyed Madde's Fringe show Dear Madde, and What's A Ocean? sounded like a fun concept, so I went, and really enjoyed it.

Madde and Emily have written a series of short two-person sketches about their new respective hometowns - NYC (aka the greatest city in the world) and L.A. (never been, and have no desire to go). The show opens and closes with a witty voiceover explaining the situation, and they make nice use of voiceover and video in several of the sketches. Topics covered include the juicing craze, calling home obsessively, the dangers of nannying, the stress of traveling in L.A. (traffic) and NYC (subway), a hippie cafe called "Cafe Gratitude," meeting old friends at a party and telling them about your new life, and my favorite sketch - online dating (using scarily real profiles). Madde and Emily also each read a humorous piece they'd written, Madde about life in Brooklyn, and Emily a letter to her future daughter.

Madde and Emily are two funny and talented Minnesota women and I wish them well in their new homes on the Coasts. But I also hope they continue to come home to Minnesota on occasion to share their talents with us!

*I had never been to the Bryant Lake Bowl before, although I'd heard about it and walked past it during Fringe week. It's a cute little theater at the back of a restaurant and, yes, bowling alley. Something to note for next time - food and bar service at your seat!