"Baby Case" at the History Theatre 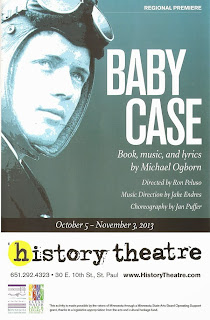 We live in the media age, with the proliferation of the internet, Facebook, Twitter, and 24-hour cable news channels. Or at least that's what we believe. But the musical Baby Case, receiving its regional premiere at the History Theatre, shows us that 80 years ago the media, and its customers the American public, were just as celebrity-crazed, crime-obsessed, and scandal-hungry as we are today. The only thing that differentiates the current "media age" from past ones is the format, frequency, speed, and availability of the media. In 1932, the celebrity was famed aviator Charles Lindbergh, and the crime was the kidnapping of his 20-month-old son. This "crime of the century" and subsequent trial of the man accused of committing it stirred a media sensation very similar to what we see today. The media and the American public's reaction to the crime and its effects on the people involved are the subject of the musical, rather than the crime itself. Baby Case is a fascinating and fantastic original musical that explores the ideas of fame, crime, and the relentless obsession of the media, told through music in a classic musical theater way.

The musical begins with establishing Lindbergh as a celebrity and a reluctant hero, and quickly progresses to the disappearance of Charles Jr. from his nursery one night. The first act deals with the search for the baby and the kidnappers, and the sad conclusion to the former search. In the second act, Bruno Hauptmann is accused and tried two years after the crime, with the primary evidence being possession of bills from the ransom money. The media interferes with all of this, as do Lindbergh's famous and powerful friends (including president Hoover). It's a tragic story with no happy ending for anyone, except perhaps for the newspapers. All of this is told beautifully and powerfully through song, with little spoken dialogue. It's a traditionally structured musical, with big ensemble numbers ("Hauptmann Murdered the Lindbergh Baby!") and quieter moments of internal reflection ("Lullaby," "Over the Sea"). Baby Case proves that you can make any story into a musical, if done right, as this one is. It's funny, moving, entertaining, informative, relevant, thought-provoking, and with tunes you will leave the theater humming. 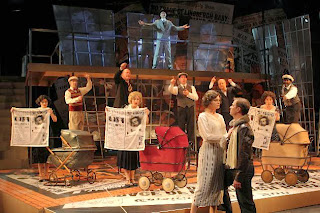 The 11-person cast is wonderful across the board, all of them playing multiple characters. Peter Middlecamp and Kendall Anne Thompson play both couples at the center of the story - the Lindberghs and the Hauptmanns (the man convicted of the crime and his wife, who devoted her life to clearing his name).  They have great chemistry as both couples, and both Peter and Kendall have beautiful voices and really bring out the complicated emotions of their characters. In the second song of the show (the moment I knew this was going to be a good one) they form a powerful trio with Kym Chambers Otto as the Nurse who discovers that the baby is missing. Other standouts in the cast include Jon Andrew Hegge, transitioning between famous radio gossip Walter Winchell and a judge with a deft turn and removal of a hat; Gary Briggle as the man who facilitated the ransom delivery, the questionable defense attorney, and Phil Donahue; Emily A. Grodzik as an accused servant and Ginger Rogers; and Paul R. Coate, providing a bit of comic relief as a lady socialite duped into paying ransom money to con artists.

The production elements are also all top-notch. The Hooverian set is simple, efficient, effective, and evocative, with newspapers in the background reflected in mirror image on the floor, as well as a ladder and fireman's pole for easy movement to the second story area. The wardrobe by E. Amy Hill reflects this color palate of yellowed newspapers - black, white, tan, neutrals, with pops of red or maroon and nary a green or blue to be seen. Lovely period clothing and a fabulous aviator jacket that makes me want to find one for myself (in faux leather of course). Jake Endres leads the sparse four-piece orchestra, just off stage, through this great music.

Baby Case is a promising new musical (it was a hit at last year's New York Musical Festival) with shades of Ragtime (the first "Crime of the Century!"), Floyd Collins (another early 19th century media circus), even Next to Normal (mourning the loss of a child). In the second act I had flashbacks to another musical on that very stage - the Theater Latte Da/MN Jewish Theater co-production of Parade, about another man falsely (?) accused of the murder of a child. This is not to say Baby Case is derivative; it's an original creation that fits well in the musical theater anthology. If you're a fan of musical theater, you should not miss this fantastic production of a great new musical (playing through Nov. 3 at the History Theatre in downtown St. Paul, discount tickets available on Goldstar).