"Maple and Vine" by Frank Theatre at Old Arizona 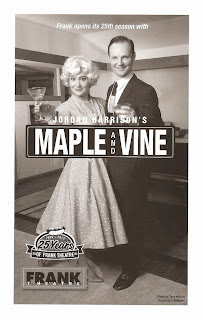 We long for "the good old days," when things were simple and everyone was content, before the busyness and technological craze of the modern era. We admire the idyllic lives of the Cleavers or Ozzie and Harriet. But what would happen if we really could return to those days? Would we find them as wonderful as they seem? The new play Maple and Vine, which opens Frank Theatre's 25th anniversary season, explores that very idea. People from the modern world leave it to live outside of society in a world that's patterned on 1955, trying to achieve "authenticity" in everything from the food they eat to the racism specific to the time. As you can imagine, it turns out that the good old days are not exactly as simple and happy as we like to imagine. What the exquisite TV show Mad Men does for the 1960s, Maple and Vine does for the 1950s - dig beneath the shiny happy veneer to reveal the repression and unhappiness that lie underneath.

Katha and Ryu are a typical American couple, busy with their careers and hectic modern life. They've recently suffered a loss and are struggling with regaining their footing in their lives. When Katha meets a man in a sharp suit and hat who tells her about a place where life is simpler, she's intrigued. She convinces her reluctant husband to move to the Society of Dynamic Obsolescence (SDO), where he trades his job as a plastic surgeon for a position making boxes at a factory, and she trades her business suits for an apron. Katha, now called Kathy, seems to flourish in this environment as she revels in going to society meetings and making crab puffs. But Ryu, who is of Japanese heritage, struggles with the "period appropriate" racism and conflicting feelings about the "recent" internment of Japanese Americans, as well as his own conflicting feelings about his new role as "head of the household." As chief recruiters for the SDO, Dean and Ellen provide a perfect example of life in 1955, until secrets come to light that reveal they're not what they seem. Are Katha and Ryu ready to take over for them and make a life in this new old world, despite their reservations?

As usual, Frank Theater has assembled a sparkling cast. Tessa Flynn and Sherwin Resurreccion are believable and relatable as Katha and Ryu, the couple through whom we're introduced to this bizarre world. Because of their dissatisfaction with the world and their life, it's easy to empathize with them and understand why they might fall victim to this too-good-to-be-true scheme. As Dean and Ellen, Wade Vaughn and Katie Guentzel project the perfect glassy-eyed veneer of the happy couple as they provide tips to their new recruits, and also give us glimpses of what's going on underneath. Rounding out the cast is David Beukema, in a sympathetic turn as a man with a past (and current) connection to Dean.

The three separate set areas in the wide and shallow space at Old Arizona set the scene for both periods - a bedroom and kitchen set that transform between acts from the modern era to 1955, and a third space used as an office, factory, or dining room (set design by Ursula K. Bowden). In addition, a fabulous '50s living room is also set up in the second act (see photo at left). The complicated set does lead to lengthy scene changes, but at least they're filled with smooth '50s tunes. And the '50s fashions (by Kathy Kohl) are to die for - gorgeous full-skirted dresses for the women and sharp suits for the men. (Unlike the racist and sexist attitudes, the fashion of the '50s is worth holding on to!)

Only two more weekends to catch this intriguing new play. Frank is again also offering free readings of plays by playwright Jordan Harrison during the run of the show; see their website for info about both.