"Broadway Songbook: Musicals of the 1950s" at the Ordway 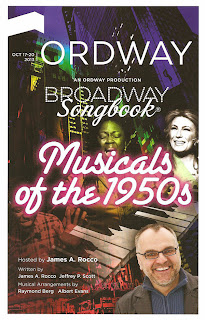 In the continuing musical theater history seminar that is the Ordway's Broadway Songbook series, today's lesson is on the musicals of the 1950s. Often referred to as the "golden age" of musicals, the 1950s saw the musical expand and grow as an art form, as well as influence pop culture and music. Songs from musicals were recorded by the top musical artists of the day and were heard on the radio. Many musicals from the 1950s are still frequently produced today* and are among the most beloved. With legendary creators such as Rodgers and Hammerstein, Irving Berlin, Leonard Bernstein, and Loesser and Loewe, Ordway Producing Artistic Director and writer/host of the Songbook series James Rocco had hundreds of fantastic songs to choose from. He's made some great choices and assembled them into a narrative about this musical decade, along with Ivey-winning Music Director Raymond Berg on piano. Many of the musicals featured in the show are very familiar to me, some I've only heard of, and some "hidden gems" were previously completely unknown to me. That's what I love about the Broadway Songbook series - I learn so much about musical theater history, relive some of my favorite shows, and get a taste of shows I've never seen or heard of before.


Things I learned at this musical theater history lesson:


For the last two seasons, Broadway Songbook has been performed in the Ordway's McKnight Theater. But since the McKnight has been replaced by a hole in the ground, the show has been moved to the Ordway's main stage in a creative way. In order to maintain the intimate feel of the smaller McKnight Theater that works so well with the Songbook series, the show is set up at the back of the huge stage, with audience seated in chairs right on the stage. It's a really cool experience to be on that stage and look out at the empty house. However, the sight lines are not great, with twelve rows of seats on the same level and the stage area only raised a few feet. If they performed at the front of that big stage, with a curtain dropped to make the stage shallow, and only seated people in the front section of the house, it would maintain the intimate feel and eliminate the need to bob one's head around the guy sitting in front of you. But they're making the best of a less-than-ideal situation.

James said "none of my responsibilities give me as much joy as producing the Broadway Songbook series," and it shows. His joy and passion for musical theater is infectious, making this a highly successful series that I hope they continue for years to come! Only four performances remain (two today and two on Sunday) and are tickets are limited, but if you're interested click here or call the box office. And get your tickets now for the next lesson on George Gerswhin in early January. (And click here to read about past lessons in the Broadway Songbook series.)

*Two musicals featured in this Broadway Songbook will be produced by local theater companies next year. Ten Thousand Things will bring their signature stripped-down-bare-bones-straight-to-the-heart style of theater to The Music Man early next year, and Bloomington Civic Theatre is doing Gypsy next spring. James also said that he's hoping to reimagine Damn Yankees on the Ordway stage sometime soon. This is another musical I'm not familiar with, but as a Twins fan I'm very familiar with the phrase "damn Yankees!"