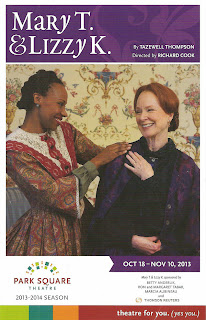 Mary Todd Lincoln, the wife of President Abraham Lincoln, has a reputation in American history as being difficult and, well, somewhat crazy. Last year's hit movie Lincoln gave us a more sympathetic portrait of this woman who not only lived in the public eye during the Civil War, but also suffered the deaths of three of her four sons and her husband. The new play Mary T. and Lizzy K. by Tazewell Thompson gives us yet another view of this fascinating woman through her friendship with her seamstress Elizabeth Keckly, a former slave who bought her freedom and became dressmaker for the most famous woman in America. It's a small and intimate play, with just four characters in a room talking (we also meet Lincoln and Lizzy's young assistant). But through the performances of these four wonderful actors, the world of the Lincolns is brought to life for a short time on the Park Square stage.

The play takes place on the day of Lincoln's assassination, when the couple is planning a trip to the theater, unaware of the real tragedy that awaits them at Ford's Theatre. The play also flashes forward to when Mary is institutionalized by her son and receives a visit from Lizzy, who was written a book about their time together which has angered Mary. But on that day in 1865, things were relatively happy. Lizzy (another strong performance by Shá Cage) is making a new dress for Mary (Linda Kelsey, beautifully portraying the range of Mary's emotions and moods), with the help of her assistant, the eager young Ivy (Nike Kadri, shining in the light-hearted moments of the youth and sympathetic in her stories of abuse). Abe (Stephen D'Ambrose, with a quiet dignity and congeniality) stops in to visit his wife. They are still mourning the death of their son just a few years earlier, and dealing with the aftermath of the Civil War which has only recently ended, with great cost to both sides. There's a genuine love and affection between the two of them, despite the fact that Mary flies off the handle at the slightest provocation, met with kindness and understanding from her husband. Lizzy tells Ivy to ignore these incidents and continue her work. Lizzy is Mary's friend and confidante, but the relationship is not without its problems. Mary has not paid Lizzy for any of her work, and Lizzy has in turn not paid Ivy. Ivy, who has suffered greatly in her time as a slave, insists that Lizzy pay her with her cloak and hat, so that she too can feel the pride of being a free person who is paid for her work. All four of these distinctly drawn characters have a story to tell.

The set (the third one designed by Michael Hoover that I've seen in as many weeks) is simple and effective, with four stately columns and four tall panels with a door in each, and just a few chairs and tables in the space. Extras in period clothing open and close doors, cover furniture, and make other slight changes in arrangement to signal the change of time and location. Clothing is a central part of this play, and the costumes (by Merrily Murray-Walsh, who also designed the costumes for the original production at the Arena Stage in D.C.) live up to that importance. In the first act Lizzy and Ivy construct a dress before our very eyes, placing and pinning pieces on Mary, beginning with a large hoop skirt. The finished work is even more impressive, as are all of the dresses, shawls, cloaks, hats, and suits we see on stage.

Mary T. and Lizzy K. is a fascinating look at a pivotal time in American history through the eyes of four characters (three of them based on real people). You, too, can enter the world of the Lincolns from now through November 10 at Park Square Theatre in St. Paul.