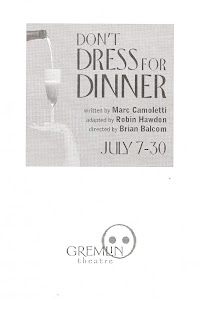 Good news friends, Gremlin Theatre is back with a new performance space in St. Paul! Four years after losing their space on University and Raymond, which also hosted other theater companies and the Minnesota Fringe Festival, they've opened a brand new space just a few blocks away on Vandalia (although they've continued to do shows at other venues in the intervening years). They are continuing to make improvements to the space that includes a spacious lobby and an intimate thrust stage, conveniently located near the Green Line, just off highways 94 and 280, and right next door to Lake Monster Brewery, whose libations can be brought into the theater. And there's also free parking! What more could you ask for from a theater space? Just one more thing, and that's great theater. The inaugural production at the new Gremlin fulfills that last requirement - the hilarious and tight comedy Don't Dress for Dinner (which was the first show they did nearly 20 years ago, read more about that here). It's a really funny and fast-moving show with a fantastic cast, and a great way to christen this exciting new St. Paul theater space!

If you saw Torch Theater's production of Boeing Boeing in 2015 (the year that Gremlin and Torch had a mini-residency at the Theatre Garage), Don't Dress for Dinner will seem very familiar, in a good way. More than 20 years after writing Boeing Boeing, French playwright Marc Camoletti returned to the formula that worked so well the first time - a couple of friends named Bernard and Robert, the latter visiting the former who has some crazy scheme involving mistresses, secrets, and doors (as I've noted before, more doors = more funny). While Boeing Boeing is set squarely in the '60s, Don't Dress for Dinner premiered in the late '80s/early '90s so it feels more modern, and this production appears to be set in the present day. This time, Bernard is married to Jacqueline, and invites his mistress Suzanne and old friend Robert (who, unbeknownst to him, is having an affair with Jacqueline) to visit for the weekend. He's also booked a cook named Suzette for the weekend... and you can probably see where this is going. Mistaken identities, lies, cover-ups, and frantic maneuverings on the men's part to keep this weekend from collapsing into disaster all add up to a crazy fun ride.

The craziness happens on a set (designed by Gremlin's Technical Director Carl Schoenborn) that looks every bit the chic and modern home in a converted barn (my new favorite word is piggery), including three rustic doors and an exit upstairs to the hayloft. Under the crisp direction of Brian Balcom, this fantastic cast plunges head-first into the comedy, sometimes literally, as things get pretty physical at times, leading the characters into... compromising positions. Artistic Director Peter Christian Hansen is charming and smarmy as Bernard, the mastermind behind the sordid weekend. Grant Henderson is an adorably frazzled Robert, shocked at what his friend has gotten him into but helpless to prevent it. Melanie Wehrmacher is strong as the cheating wife who also manages to be upset that her husband is also cheating. As the mistress Suzanne who's asked to pretend to be the cook, Sierra Schermerhorn is seductive and pouty, while Mike Dolphin impresses as the other Suzie's husband, incredulously making his acting debut in this play. The whole cast is playful and game for anything, but perhaps my favorite is Maeve Moynihan as the tough-talking cook Suzette. The little girl who played Carrie in the world premiere of the Little House on the Prairie musical at the Guthrie nearly ten years ago is all grown up, but hasn't lost that unique spark that makes her irresistible onstage.

Don't Dress for Dinner is escapist entertainment, perfect for a warm summer night, especially when paired with a visit to the Lake Monster taproom (check out their food truck schedule). It's a play that brings to mind the famous quote, "fasten your seat belts, it's going to be a bumpy night." What may be a stressful evening for the characters involved is a whole lot of fun for the audience. Don't Dress for Dinner continues Thursdays through Sundays through the end of the month (discount tickets available on Goldstar).