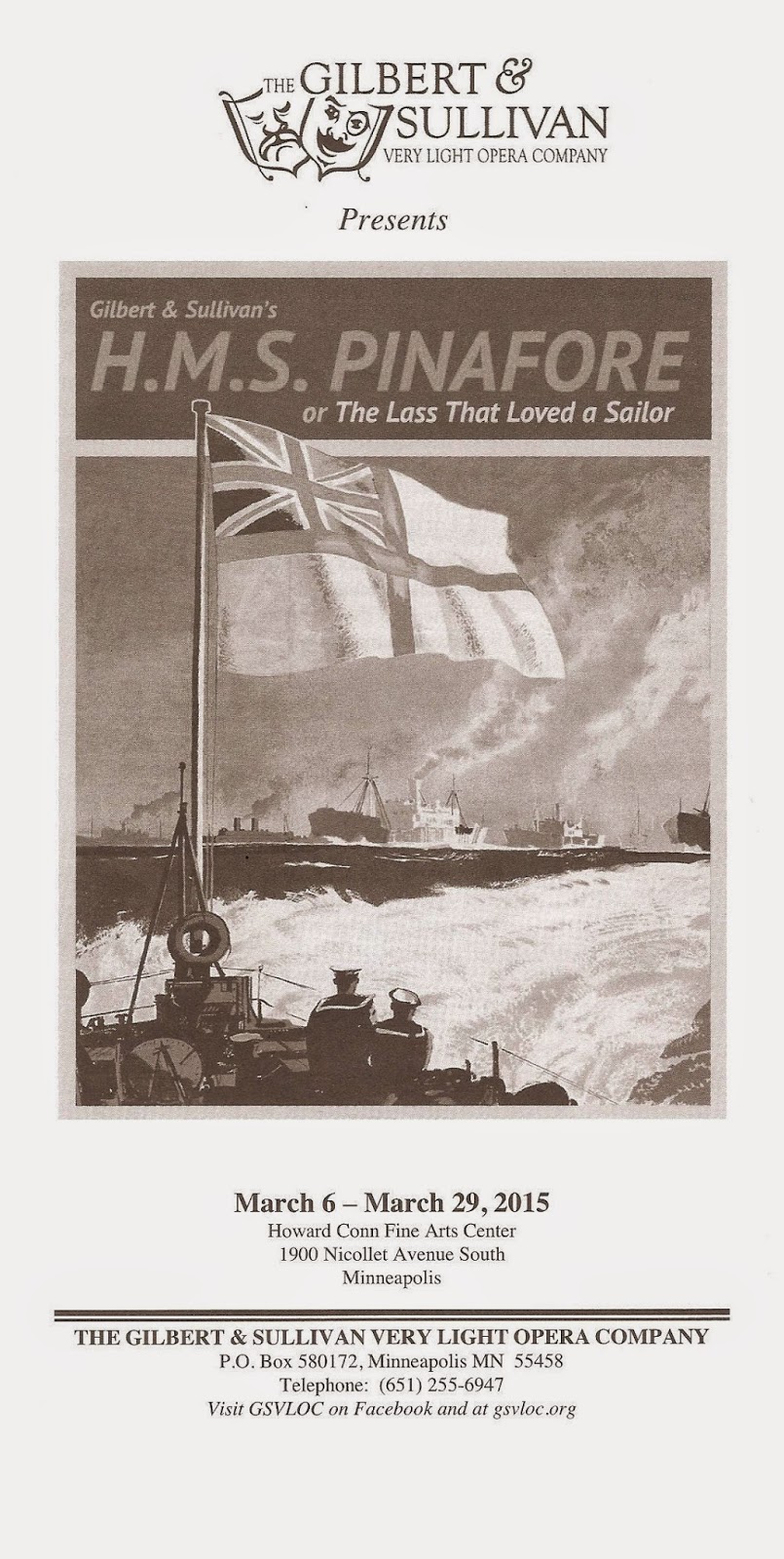 Such is the breadth and depth of the Twin Cities theater community that a company such as Gilbert and Sullivan Very Light Opera Company has existed for over 30 years and I, an avid theater-goer who prides herself on knowing just about every company in town, have never heard of it. True, it skews a little more towards the opera end of the music-theater spectrum than I usually venture, but that's no excuse. I've seen several G&S operas and am enamored of their fast, witty, tongue-tying, clever lyrics and intricate rhythms. I attended my first production by this company yesterday, and while it might have helped that this year they're doing H.M.S. Pinafore, a show I'm familiar with from the Guthrie's boisterous production a few summers ago, I found it to be absolutely marvelous! A cast of over 30 and orchestra of over 30 performing a classic piece of music-theater in a straight-forward and energetic manner? Oh joy, oh rapture!

H.M.S. Pinafore, or, The Lass That Loved A Sailor, takes place on ship somewhere off the coast of England. While the piece was written in the late 19th Century, the costumes and the presence of a radio places it in the 1940s. A Captain reigns over a crew of sailors, one of whom, the bright and earnest Ralph, has fallen in love with the Captain's daughter Josephine. She has also fallen in love with him, but is betrothed to Sir Joseph, "the ruler of the Queen's navy." Ralph and Josephine decide to marry despite the difference in their stations and her father's disapproval, when a long-held secret is revealed that turns the situation on its head. It's a whole lot of silliness that allows for many great songs with Gilbert and Sullivan's trademark repetitive pitter-patter lyrics. As director Lesley Hendrickson notes in the playbill, "Don't ask how old Little Buttercup is supposed to be. Don't even think it." Just go with it and enjoy the fun and frivolity.

Many of the cast members seem to have been members of the company for many years, which is obvious in how well they sing and play together. One such long-time member is Waldyn Benbenek who beautifully sings the role of the Captain. He's joined by Tom Berg as the stuffy and very funny Sir Joseph. Kai Brewster and Victoria Valencour sound lovely and are very convincing as the young star-crossed lovers. Ryan Johnson is quite funny and a bit scary as the villain Dick Deadeye, remarkably his first acting role as an adult. Caitlin Wilkey is the charming Little Buttercup, she of the mysterious age and holder of the secret. Stephen Zehr and Amanada Weis ably lead the wonderful chorus of sailors and sisters/cousins/aunts, respectively. The entire cast is really impressive in singing these songs with precision. When 30+ voices are joined together in harmony, it's really quite thrilling.

Also thrilling is this huge orchestra, perhaps the largest orchestra I've ever had the pleasure of listening to at a music-theater production. Way too big for a pit, they're crammed backstage out of sight, but I knew were there because Music Director and Conductor Randal A. Buikema was introduced before the show and shook hands with the first violin, like a real orchestra. As a former member of the pit orchestra, I'm quite happy to see the orchestra so prominently featured and sound so wonderful.

If you like your opera very light and beautifully sung and played by cast and orchestra, this company should definitely be on your radar, as they are now on mine. They typically only perform one full opera per year, in the spring, but they also present a summer concert at the Lake Harriet Bandshell (a wonderful place to listen to music in the great outdoors) and this year are planning to participate in the Fringe Festival.

While it's my first time seeing this company, they obviously have a loyal audience as performances frequently sell out. Order your tickets now if you're interested in seeing this wonderfully performed and entertaining classic.