"The Drawer Boy" at Theatre in the Round 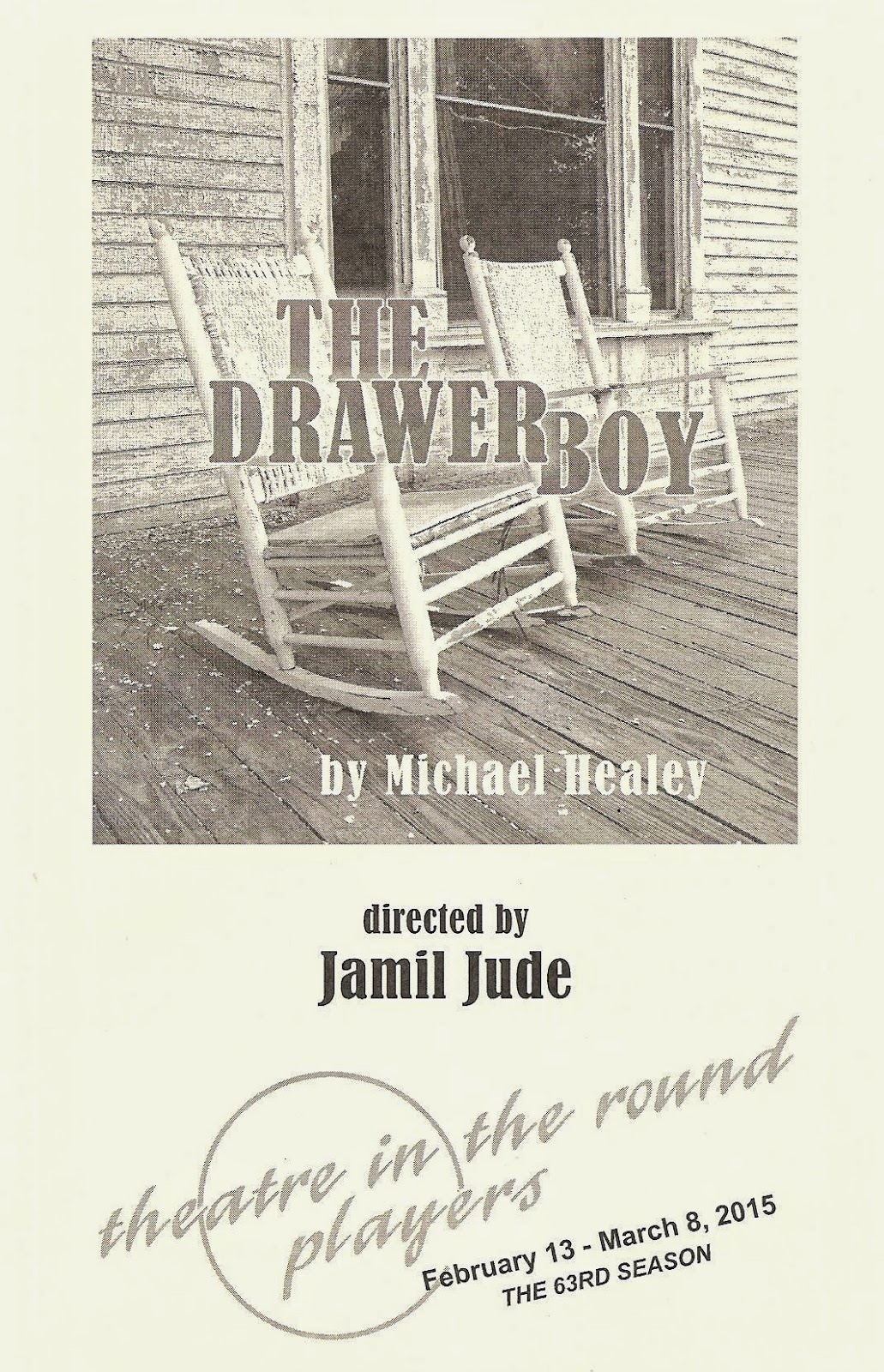 The 1999 play The Drawer Boy by Canadian playwright Michael Healey is apparently one of the most produced plays in Canada and the US, but I had never heard of it. I admit I was confused by the title; is this about a boy who draws, or a boy who lives in a drawer? It's of course the former, but this boy is much more interesting than just being a drawer. He grows up to fight in WWII with his best friend, where a brain injury destroys his short-term memory. After returning home to rural Canada, the two men settle into their lives as bachelor farmers. Not much changes until an actor arrives to write a play about them, and it forces them to reexamine the story they've been living and telling for 30 years. This production by Theatre in the Round (now in their 63rd season, the oldest theater in Minneapolis) tells this story well and sweetly.

We meet lifelong friends Angus (he of the brain injury) and Morgan at the same time city slicker Miles does. It soon becomes obvious to Miles and the audience that Angus is... special. Although he remembers Morgan from the pre-war days, and after years of repetition and practice he knows how to do things like make sandwiches (lots of sandwiches) and drive a tractor, he can't remember new things or people. Miles has to reintroduce himself every day as he follows the farmers around with his notebook, gathering material for the play he's working on (interestingly based on a true event in Canadian theater in 1972 called The Farm Show). Morgan has a good time with the gullible actor, asking him to perform tasks like washing rocks and rotating the crops at 3 am. Every night Angus asks Morgan to tell him a story, the story of their life. Miles overhears this touching story of love, friendship, and loss, and puts it into the play. When Angus and Morgan go to the rehearsal and hear Miles' rendition of their story, Morgan is angered, but Angus is delighted. And more importantly, it triggers something in his injured brain and he begins to remember. It changes the delicate balance in Angus and Morgan's life, of which Morgan has always had control. But as painful as it is to hear, perhaps it's better for both of them to know and speak their true story.

The three-person cast does a wonderful job of bringing this story to life, under the direction of Jamil Jude who makes great use of the in-the-round space. It really is an interesting and unique way to see theater; it provides a three-dimensional, 360-degree, more realistic view of the story. Keith Shelbourne is sweet and sympathetic as the addled Angus, and believably portrays his reawakening and longing for something more. Bob Malos is the epitome of the bachelor farmer (something we Minnesotans are also familiar with), a no-nonsense hard worker with little time for frivolities, but hiding a depth of feeling for his friend and deep pain at their shared past and the loss he carries for both of them. Mike Swan is also great as the eager actor who teaches the other two men a bit about storytelling.

The play is set in 1972, which you wouldn't know from the farmers' timeless uniform of Levis and plaid shirts, but the city kid actor displays a fun array of '70s fashion. The farm set fills up the in-the-round space, with short walls between the indoor kitchen and living room and the great outdoors, and open spaces hinting at doors and windows. The lighting nicely highlights the time of day, from nighttime star-watching to the morning sun glowing warmly through the imaginary windows (costumes by Amy B. Kaufman, set by Laura Tracy, lighting by Andrew C. Kedl). I also quite enjoyed the pre-show, intermission, and between-scenes soundtrack - a mix of '70s and acoustic folk and country.

Theatre in the Round's poignant production of The Drawer Boy continues through next weekend only.