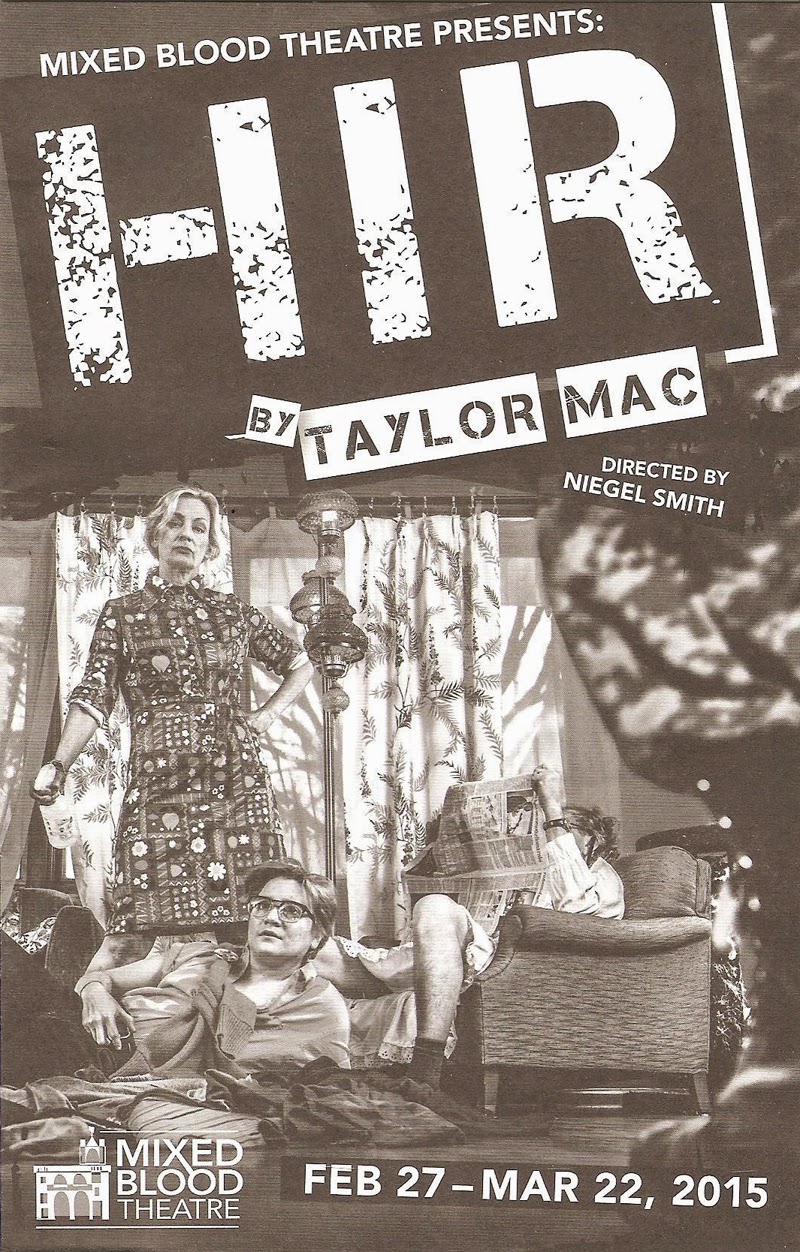 The English language is in need of a gender-neutral pronoun. Firstly to eliminate the awkward "he or she" and "his or her," but also to refer to people who don't identify with either, or in cases where gender really doesn't matter (which is most cases). I recall reading the suggestion "per" in a Marge Piercy novel years ago. The title of the new play Hir (pronounced here) is playwright Taylor Mac's suggestion for an alternative to her and him, with ze replacing he and she. But to say that Hir is about transgender and gender issues is to simplify it too much. In fact, it's difficult to put into words just what it's about, but I'll do my best. It's epic and brutal and funny and heart-breaking as it explores ideas of not just gender, but also class, domestic violence, the changing order of things, and the effects of war on soldiers and those left behind. It's one of those plays that will rip you open, lay your emotions bare, and perhaps leave you with a bit of a queasy feeling in the pit of your stomach. But this beautifully done, perfectly cast production at Mixed Blood Theatre, known for its challenging and rewarding work, is well worth it.

Hir is about a typical American family - mother, father, son, daughter. But as soon as the curtain opens on the cluttered and messy house, revealing barely-there dad Arnold (John Paul Gamoke) in clown make-up, loony mom Paige (Sally Wingert), daughter Max (Jay Eisenberg) who identifies as a boy, and son Isaac (Dustin Bronson) returning from three years at war serving in the Mortuary Affairs department, it's obvious this family is anything but typical. Dysfunctional doesn't even begin to cover it; this is a family steeped in violence, cruelty, and destruction. But they're still here, together, trying to make sense of the new order of things in the "starter home" they never left. Isaac returns from war to find things have changed greatly in the last three years - Arnold has had a stroke, Max is a he, or ze, and Paige has discovered a newfound freedom after being released from years of violence and oppression at the hand of her husband, and being inspired by her child's determination to move beyond confined gender roles. She has freed herself from all conventions of traditional society, even the conventions of folding laundry and putting dishes away in cupboards, because in her mind, it's all part of the oppressive life she left behind. Isaac is shocked and disturbed by this new non-order, and by the humiliating way his mother treats his stroke-addled father. He cleans up the house and tries to help his father remember who he is. Paige is incensed by the cleanliness and the "normative kitchen table in the kitchen," seeing it as a move back to Arnold's controlling way. She tells Isaac that because of the violence and cruelty of his pre-stroke life, he does not deserve compassion. But is that true? Doesn't everyone deserve compassion? Perhaps, but perhaps it's too much to ask for from the person he hurt most.

Each one of these characters is flawed, courageous, and despicable at times, and at all times real. I found myself changing allegiances many times during the play; I'd empathize with someone in one moment, and intensely dislike them in the next. The person Arnold used to be, and his small movements back there, are truly horrifying, but he's also a lost, sick, damaged man. Max is an infuriatingly bratty teenager, yet hir determination to be who ze really is, despite the conventions of society, is truly inspirational. Isaac, like many returning vets, is forever affected by what he's experienced in the war, and more than anything wants to return to the home he knew, but when he starts to take the place of his father by controlling his mother and her house, it's unacceptable. Lastly, Paige is a fascinating, wacky, and compelling character. It's difficult to watch the way that she treats Arnold, but it's understandable considering their history. And it's obvious that she loves and supports her children, and has done the best for them in a difficult situation. Inspired by Max, she says some really lovely things about moving beyond a world of two distinct strictly defined genders to a world where we can all just be who we are.

These complex characters are brought to vivid life by this beautiful cast, all of whom give such raw, vulnerable, truthful, and at times painful performances. NYC director Niegel Smith brings out the best in each of them and somehow makes sense out of this mess of a family and home. And speaking of mess, kudos to Properties Designer Abbee Warmboe for filling Joseph Stanley's dingy house set with so much clutter in the form of clothes, garbage, dishes, and who knows what else, that I wanted to jump on stage and start cleaning it myself!

One other thing to note: I find it interesting that in a play named after a new pronoun, Isaac is often called I, the first person pronoun. I don't know what that means, but it can't be a coincidence, can it?

Mixed Blood Theatre never fails to challenge, inspire, entertain, and make you think. Hir is no exception. It's not an easy play to watch at times, but it's well worth the effort. If you like your theater risky, challenging, and thought-provoking, head to Mixed Blood between now and March 22. Take advantage of their Radical Hospitality program - just show up and get tickets for free if they're available - or reserve tickets in advance for $20 online or by phone.