"The Woman in Black" at Yellow Tree Theatre 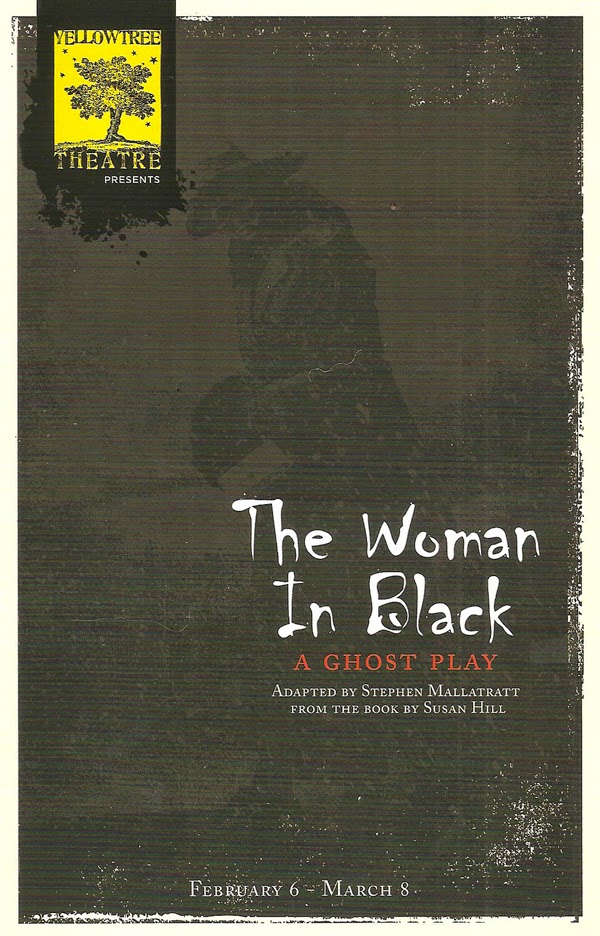 The Woman in Black, a two-person play that's another perfect choice for Yellow Tree Theatre's intimate space, is a story-within-a-story. It takes a minute to figure out what's going on and really get into it, but once you do, it doesn't let you go. The story that's being told is a spooky ghost story, beautifully told through the structure of the play, the two marvelous actors, and the extremely effective lighting and sound effects. It's a deliciously chilling experience that had me squirming in my seat!

The play begins when Nathaniel Fuller, one of the aforementioned marvelous actors, both of whom have been acting on stages around town for decades, enters the crowded dusty stage that looks like a cluttered attic, full of old furniture, crates, and boxes. He sits there in awkward silence for several minutes while the audience waits for the action to start. It was in this moment of silence that J.C. Cutler popped up behind me and spoke the first words of the play, scaring the bejeebers out of me (a feeling that was only just beginning). It soon became clear that Nathaniel is playing a man called Arthur Kipps who has decided to work through a traumatic event in his past by writing it down as a play. J.C. is the actor who helps him tell his story. Eventually we get to the meat of the story, with the actor portraying Kipps as he journeys to a remote part of England to close the estate of a recently deceased client. Kipps himself plays all of the other roles in the story, and as the play-within-a-play goes on he gets more and more comfortable in the telling. The two occasionally break out of character to discuss things, or if Kipps is too upset with the subject matter, hinting at the terror to come. It's a clever way to tell the story, on the one hand the characters are sort of outside of it, but on the other hand they're totally immersed in it.

And the story they're telling is a spooky one. I won't go into details because the unfolding of it all is too much fun. But suffice it to say it involves an unwed mother, a remote location, a horrible accident, thick mist, and a not very nice ghost. All of it is told in such vivid detail that you can almost see the deserted old house on the island. The lighting and sound design are crucial to the telling of the story. The play goes from full lights to complete blackness, and everything in between, with lights occasionally illuminating areas behind curtains onstage, including a cemetery and a child's bedroom, or flashing to reveal the woman in black herself appearing as if out of nowhere. Sounds seem to come from all directions, whether it's the sound of a horse trotting, or the house creaking, or a woman screaming. Suddenly you're on high alert, starting at every sound in the theater, even if it's just someone rustling in the seat next to you. Add to this two actors who can so easily slip into the skin (and specific accent) of these characters and take you along on their journey, and a director (Jon Cranney) who knows how to put all the pieces together, and you have a thoroughly chilling effect (lighting design by Sue Ellen Berger, sound design by Montana Johnson, and set design by Robin McIntyre).

The Woman in Black is a fine example of the power of storytelling to transport you to another place and time. And scare the crap out of you. I haven't been this scared at the theater since this other spooky ghost story a few years ago. It's kind of fun to be terrified in that good old-fashioned ghost story kind of way, as opposed to the real and scary things in the world today. Head to Yellow Tree Theatre in Osseo for some spooky storytelling at it's finest (playing now through March 8).