"Pop Up Musical" at Plymouth Playhouse 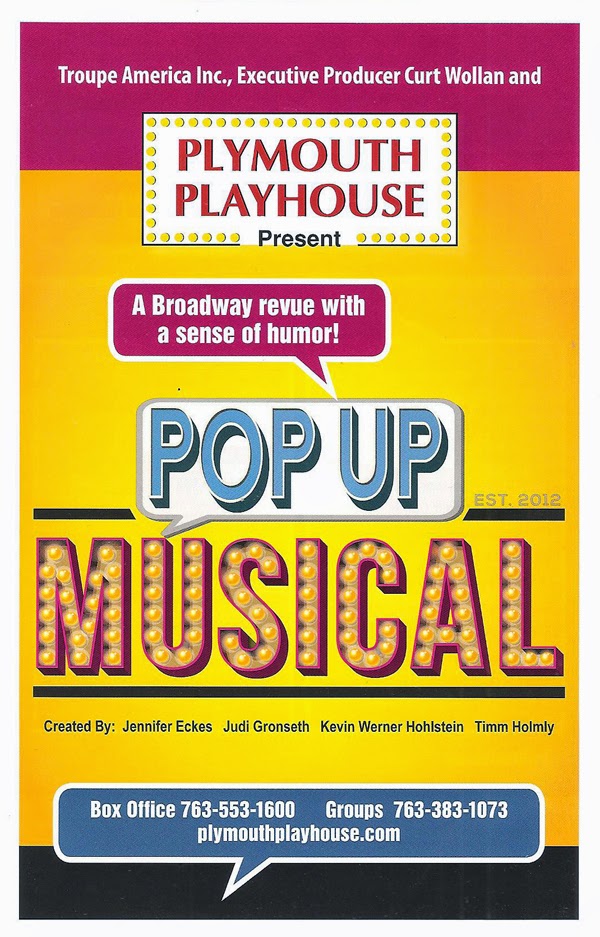 Musical theater is just the best thing, isn't it? If you agree, head west to the Plymouth Playhouse for the latest incarnation of the delightfully irreverent tribute to the love of all things musical theater, aka Pop Up Musical. Four friends, who just happen to be super talented local music-theater artists, created this show for the Fringe Festival a few years ago. It was so successful that they've expanded it and continue to bring it to various venues in the area (including the Jerome Hill Theater, where I saw it in 2013). The talented cast sings 24 songs from 24 different musicals, 23 of which I've seen on stage. Wow, am I a nerd the target audience for this show! While belting out showtunes, the cast also shares fun bits of trivia in the VH1 Pop Up Video style, using signs and video projections. It's truly a must see for anyone for whom the great American musical theater cannon holds a special place in their heart (and their iTunes).

You may have seen these four performers on stages around town. Jennifer Eckes, Judi Gronseth, Kevin Werner Hohlstein, and Timm Holmly have known each other and worked together for years (we get to learn how they all met through the pop ups during the song "Friendship"). Video screens on either side of the stage display pop ups, as well as images of things related to the song (famous magicians and clowns during "Magic To Do" and "Send in the Clowns," a photo of an actual "Edelweiss"). The cast also holds up signs with pop ups, harkening back to the show's low budget Fringe origins, and these are perhaps the most fun. While someone is pouring their heart out in song, one of their cast members picks up a sign from the big stack on one of the four podiums, and parades it around the stage like Vanna White, facial expression telling all. Signs can also be props - the blue fans of "Sisters," animals for "Circle of Life," and Annie's hair (which gets multiple uses throughout the show).

The pop ups take three forms: fun and interesting trivia about the shows and songs themselves (when it opened, Tonys, stars, backstage gossip), tangential info about a word or idea in the song (we learn that Kleenex is a proprietary eponym during "Suddenly Seymour," and about the invention and cost of champagne during "Hey Big Spender"), and personal info about the cast (Judi was born the year that Sound of Music premiered, Kevin slept on the sidewalk to get tickets to RENT). We learn how many times the words "Tomorrow," "Popular," and "Tonight" are sung in the respective songs (16, 14, and 38!), and some common malapropisms for the opening line of "Circle of Life" ("ingonyama nengw' enamabala," or "penguin mama, penguin has a mama?").

All of these shenanigans almost distract you from the fact that these four can really sing. They all have powerful, gorgeous voices, and perform with great enthusiasm and delightful camp. Songs come from such beloved and diverse musicals as Avenue Q and Fiddler on the Roof, Xanadu (featuring some impressive roller skating tricks by Kevin) and Les Miserables. The cast fights over who gets to sing one of the most beloved musical theater songs, "What I Did For Love" from A Chorus Line. Who wins? The audience, because they all end up singing it. Unfortunately they sing to a recorded karaoke-like track, but they acknowledge and poke a bit of fun at that. And they sound better than any karaoke singers I've ever heard! Still, I would love to see how the dynamic would change with a piano accompanist replacing the recorded track; it could lead to some fun interplay with a 5th person onstage, as well as greatly improving the quality of the music.

If you, like me, obsessively listen to musical theater cast recordings, define your life in terms of musical theater milestones, and constantly quote showtunes, this is a show for you. Because Jennifer, Judi, Kevin, and Timm love musical theater as much as you and I do. But unlike you and me (well, me anyway), they have the talent to sing and perform these songs and entertain an audience with their non-verbal written-on-signs banter. Pop Up Musical plays in the cozy theater in the basement of a Best Western for just three more weekends, don't miss it! See the Plymouth Playhouse website for more info, and visit Goldstar for discount ticket deals.