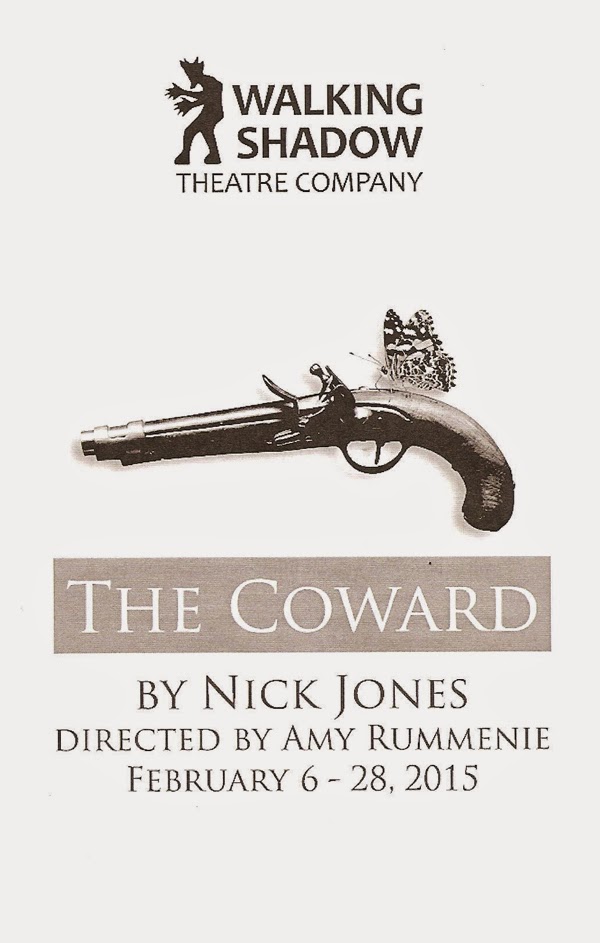 Nick Jones' 2010 play The Coward is a spoof of that gentlemanly period in England when it was appropriate, nay necessary, to challenge a man to a duel if he in any way besmirched your honor. It's a play with a lot of men fighting, and one woman to fawn over them as they fight. Walking Shadow Theatre Company has turned this idea on its head, casting women in all the male roles and a man in the one female role. It's an interesting twist that makes these proud and silly men look even more silly, maybe because we all know women are too smart to get involved in such petty and deadly disputes. It all amounts to a lot of bloody good fun.

The young gentleman Lucidus is pressured by his father to participate in duels to defend the family honor (which, by the way, got his two older brothers killed). But Lucidus would much rather classify butterflies by their beauty or go on a pie-tasting picnic with his friends, dressed in top hats and tails. He eventually agrees to a duel, but is afraid to fight it. He goes to the town pub to hire a man to fight for him, and finds Henry, who is happy to fight as long as he can do it by his rules. I don't want to spoil the outcome of the duel, but when there's a "blood designer" and two "blood assistants" listed in the credits, it's safe to say there will be blood. And lots of it. Henry gets a taste for dueling as Lucidus, and begins challenging people all over town, much to Lucidus' dismay. The situation gets even worse when Lucidus' father discovers the ruse and decides he likes Henry better, and adopts him as his son while disowning Lucidus. Lucidus agrees to one final momentous battle to settle the matter once and for all.

This wonderful cast of women (and one man) gleefully revels in the concept and the bloodletting, under the direction of Walking Shadow's co-Artistic Director Amy Rummenie. The always excellent Briana Patnode makes Lucidus likeable despite his cowardice. Jean Wolff is strong and pompous as his stern father, and Charlotte Calvert is a delight as the duel-loving Henry. Also having great fun are Suzie Juul and Shelby Rose Richardson as Lucidus' pals, and Chase Burns, the lone man in the cast, as Lucidus' haughty love interest. Last but not least, Linda Sue Anderson is a hoot as an addled old man and Lucidus' loyal butler.

This very pretty and proper set, in shades of red and pink surrounded by a in gilt frame (designed by Eli Schlatter), becomes the backdrop for some beautifully disgusting blood flow. Let's hope they have a dry cleaner on standby for Sara Wilcox's gorgeously rich costumes.

The Coward is a silly, fun, lighthearted romp through proper English duels, highlighting just how ridiculous the concept is, with a terrific cast that appears to be having as much fun as the audience. Playing through February 28 in the Red Eye Theater.