"Into the Woods" at Lyric Arts Main Street Stage in Anoka 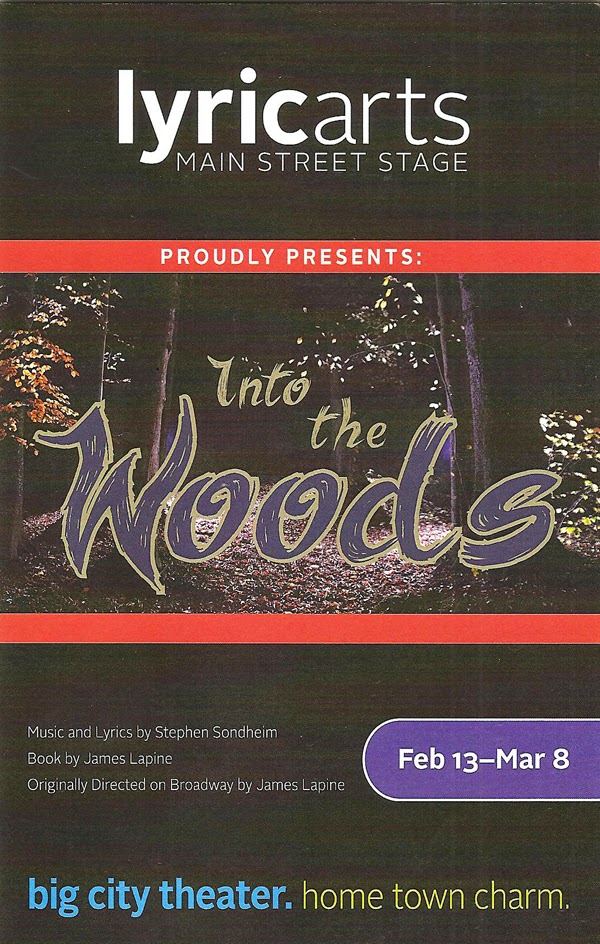 The more I see the Stephen Sondheim/James Lapine fairy tale mash-up musical Into the Woods, the more I like it. I'd seen it on stage twice (BCT and Mu) before the big star-studded movie came out a few months ago, which I also enjoyed, but seeing it on stage again is even better. Like most pieces written for the stage, it works better as a stage experience. With repeated viewings, I'm able to appreciate even more Sondheim's clever lyrics and complicated melodies and Lapine's funny and poignant book, which can be best summed up by the statement "be careful what you wish for, you just might get it." A new production* opens tonight at Lyric Arts, a community theater in Anoka that has continued to improve over the last few years. This show continues on that trajectory and is perhaps the best thing I've seen at Lyric Arts, except of course for the fantastic production of my favorite musical RENT last summer. The cast is all-around excellent with not a weak link among them, the production design includes inventive puppetry, and Sondheim's gorgeous and intricate score sounds so beautiful it sent me out of the theater singing and inspired me to finally download the cast recording (OBC, of course). If you have not yet made the drive out to Anoka to visit Lyric Arts, this might be a good time to start. 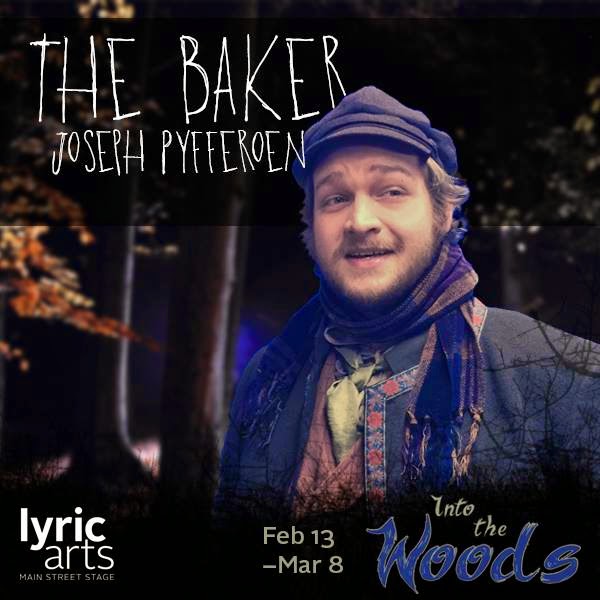 Into the Woods is a mash-up of familiar fairy tales, but with a twist. We have Cinderella with her handsome prince and missing shoe, Jack and his beanstalk that leads to a kingdom of giants, Rapunzel with her unusually long and strong hair, and a little girl in a red cape going to visit her Granny. Tying these stories together is a Baker and his Wife, who long to have children but were cursed by their neighbor, who happens to be a witch. The witch promises to reverse the spell if the couple completes a series of tasks, which will allow her to become the beautiful young witch she once was. Everyone heads into the woods to accomplish their task, where their stories intersect. At the end of the first act, everyone seems to have accomplished their "happily ever after." But the second act shows us what happens next. Happiness is complicated, actions have consequences, and things are not always what they seem. It's a little like growing up; as children we're told these fairy tales, but when we grow up we learn that life is not like fairy tales, it's complicated and messy, and "sometimes people leave you halfway through the wood." But the good news is, "no one is alone," not even witches and giants. 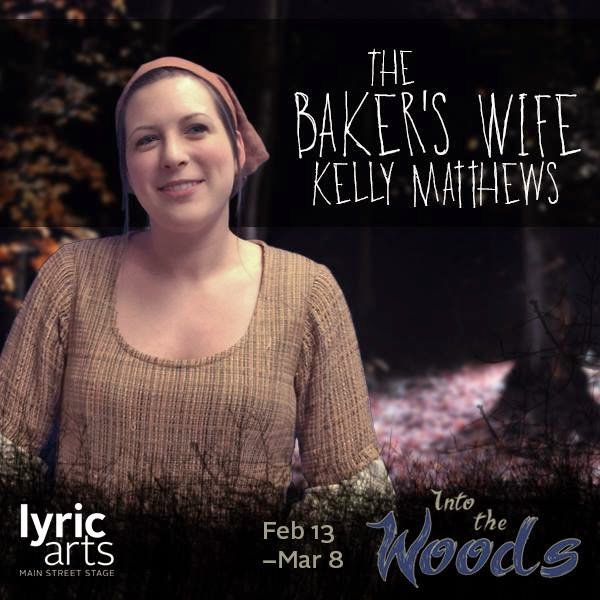 It's hard to pick out standouts in this large ensemble cast that is excellent across the board, under the direction of Matt McNabb, who also directed the aforementioned RENT, as well as the outrageous Young Frankenstein. Alyssa Seifert is a lovely Cinderella, Nykeigh Larson is at her most adorable as Little Red Ridinghood, Molly Jo Hall is the angelic voice in the tower as Rapunzel, Kyler Chase and Daniel Vinitsky are hilariously pompous and shallow as the dueting princes in "Agony," Joseph Pyfferoen and Kelly Matthews bring much humanity to their roles of the Baker and his Wife, Sam Sanderson is a sweet and open-faced Jack, Lara Trujillo's witch is creepy and deliciously over-the-top, and last but not least, 13-year-old Carter Skull is a great narrator, leading us through this story, always onstage, observing or taking part in the action. 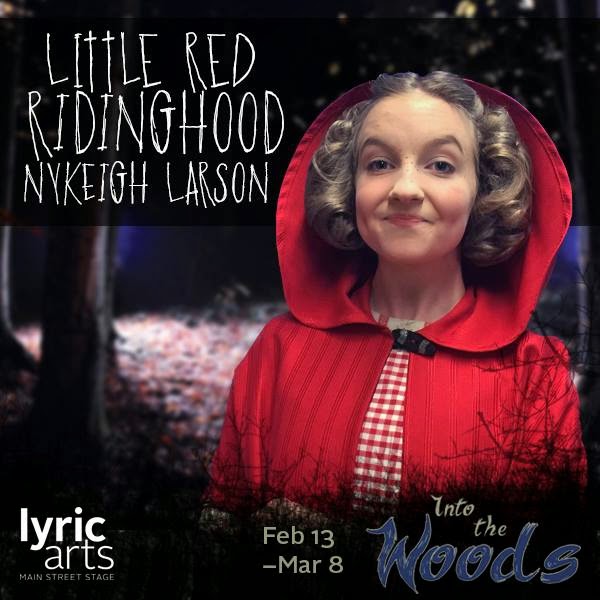 In addition to the great cast, the production elements are all well done. The stage is dominated by a large tree, with wooden stairs and platforms leading from the floor of the stage to the top of the tree, all well-utilized by the cast (set design by Ben Olsen). The animals (and some of the humans) are represented by charming puppets reminiscent of Avenue Q. Most of the puppets don't have legs, and the puppeteers are visible and as much a part of the performance as the puppets. The wolf is particularly fun, with two puppeteers manipulating the puppet and performing an intricate waltz (Kyler Chase and Gabriel Gomez, who also designed the puppets and plays Milky White). Finally, Jeff Geisler's sound design creates some ominously loud giant steps, as well as cool and mysterious echoing effects. 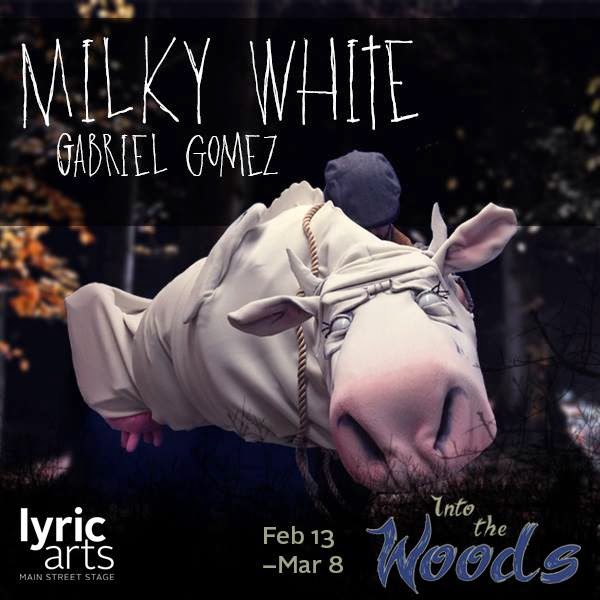 Lyric Arts is a community theater, but their productions are often at professional levels. Now that Bloomington Civic Theatre has transitioned from a community to a professional theater (which seems to be a bit of a blurry line in most cases), Lyric Arts is stepping up to be the top community theater in the region, one that serves as a stepping stone for new young talent. I really can't ask more of a production of one of Sondheim's best musicals than a talented, enthusiastic, and dedicated cast, music that sounds beautiful (music director Louis Berg-Arnold leads a nine-person off-stage orchestra), and creative sets, puppets, sound, costumes, and choreography.

Into the Woods is a musical that tickles your funny bone, tugs at your heartstrings, and challenges your brain, all set to beautiful music. If you've only seen the movie, you owe it to yourself (and the show) to see it on stage, where it was meant to be seen. Into the Woods opens tonight and continues Thursdays through Sundays through March 8 at Lyric Arts on Main Street in Anoka (if you've never been to this theater before, check out my venues page, with info and tips on thirty venues around town).


*Lyric Arts' Into the Woods is the first of two local productions this year. Theater Latte Da will be presenting their version of the show, set in a German beer garden, at the Ritz Theater, opening in March.