"God Girl" at the History Theatre 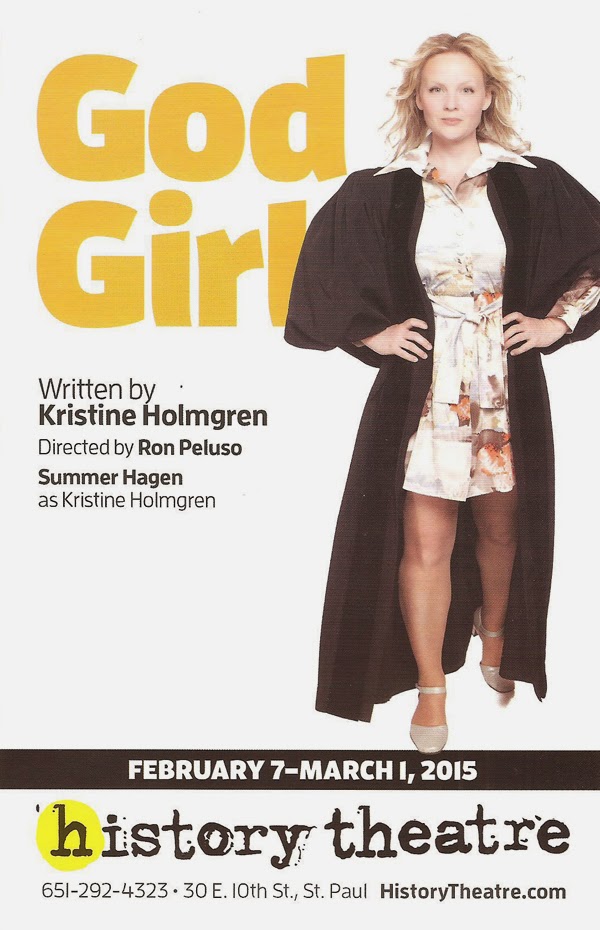 We all know that during the Women's Rights Movement of the '60s and '70s, women fought for equality on all fronts. But one such front that may be a bit lesser known is the ministry. One would think that institutions that are supposedly dedicated to faith and community might be more accepting of the idea of equality. As it turns out, not so much. In fact, religious institutions seem to be some of the last remaining bastions of male power. Minnesotan Kristine Holmgren was among the first wave of women to attend seminary in the '70s, and became one of Minnesota's first Presbyterian pastors. But it was not an easy road; she faced much discrimination and sexual harassment on her path. Lucky for us, she's also a playwright, and has turned her experiences into the new play God Girl, premiering at St. Paul's History Theatre. Her story makes for a compelling, engaging, inspiring, and relatable (judging by the extremely responsive audience) stage play.

The play begins with an introduction from Kristine's mother (a delightful Peggy O'Connell), who serves as a narrator and sounding board for Kristine (an extremely likeable Summer Hagen, portraying a character who's complex and real) throughout the play. She tells us that Kristine was always curious and loved the church, and never wanted anything other than to work in the ministry. The play mostly takes place during Kristine's first semester at an unnamed Ivy league seminary. She and her fellow female students, including Southern belle Cathy (Hannah Benedict) and sensible Unitarian Debi (Meagan Kedrowski) face daily harassment from their male classmates and belittlement from their professors. Kristine is excited to start her field internship with the well-known pastor McGovern (Sean Dooley, whose charm soon turns to creepy). At first he seems quite supportive and helpful, until it eventually becomes obvious that the attention is inappropriate from a married mentor and pastor. But Kristine and her friends "hang on for the blessing;" she endures what she shouldn't have to endure, completes her education, and begins the career she always dreamed of, paving the way for the women behind her.

Even though it takes place in the '70s, this play is not dated. It's so important to remember what this first generation of feminists went through. I attended college and received a degree in math (also a male-dominated field) a mere 20 years after this play takes place, but I faced none of the discrimination and harassment that Kristine and her classmates did. In fact the idea of women being told not to ask questions in class, or receiving multiple proposals from their male classmates, or being propositioned by their professors, is almost unthinkable today. Not to say that it doesn't happen, perhaps in more subtle ways, or that we don't still have work to do, but the world really has changed for women over the past 40 years. And it's thanks to the brave and determined women like Kristine.

But the play isn't all serious, there are some light-hearted moments and the always popular Minnesota and Unitarian jokes (a la Garrison Keillor). And the '70s setting means fun costumes - bell bottoms and flowered dresses mixed with conservative minister attire (by Kelsey Glasener), and a groovy soundtrack, complete with dancing scene changes, contrasting with Rick Polenek's stately church-like set.

I was lucky enough to attend the show on a day when there was a post-show discussion with the playwright and a few experts. She's so smart, thoughtful, and articulate that it gives me hope for the world, that women like Kristine Holmgren continue to lead the way towards a more egalitarian future. Bring your daughters (and sons) to the History Theatre to see God Girl, the all too true story of a real pioneer (as her mother rightly called her).