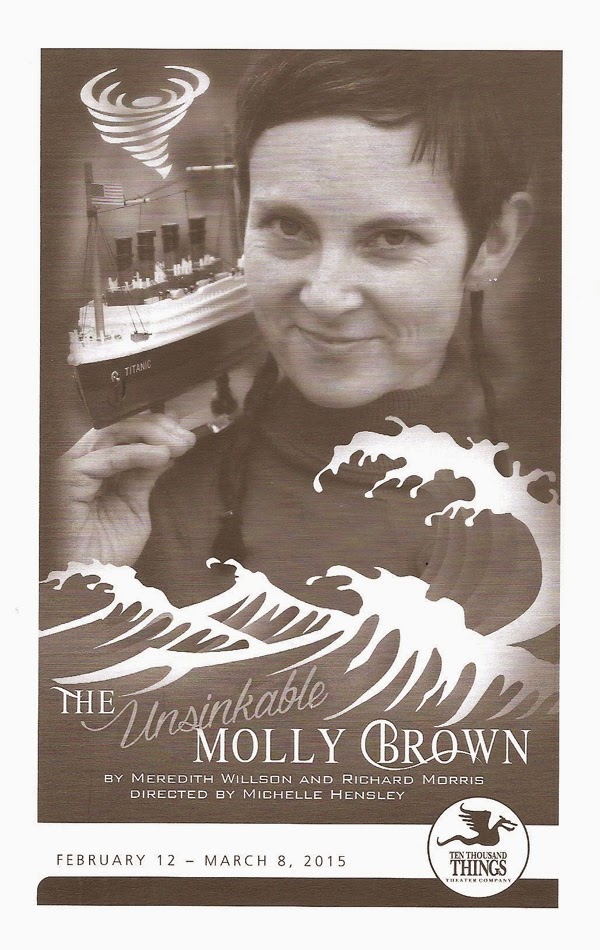 No one does musicals like Ten Thousand Things does musicals. And even though it defies everything we know about musical theater, after seeing a TTT musical I think that maybe that's the way musicals should always be done. The music, like everything else about the show, is stripped down to the very basics, extraneous layers removed to reveal the very heart of the matter. A one-man orchestra provides the minimal accompaniment, and the small cast imperceptibly transitions from speaking to singing, so that you can't even tell where songs end and begin, it's just all one seamless story. And above all else, Artistic Director Michelle Hensley and all of the artists at Ten Thousand Things are storytellers. Whether it's Shakespeare or a classic American musical, they share the story in a pure and unadorned way so that all of their audiences, whether prisoners or seasoned theater-goers, can hear it and see themselves in it. One such masterpiece is their latest musical venture, The Unsinkable Molly Brown, a reprise of their very first musical venture 15 years ago. It's lovely, spirited, sweet, funny, moving, heart-warming, and real.

I had never seen the 1960 musical The Unsinkable Molly Brown (with music and lyrics by Meredith Wilson, who also wrote The Music Man, which happens to be TTT's last musical), nor heard any of the music. The only thing I knew about Molly Brown is that she was on the Titanic (remember Kathy Bates in the movie?). But now she's my new hero. Or at least, this fictionalized version of her as played by the indomitable Maggie Chestovich. I'm not sure how much of it is Molly and how much of it is Maggie, but this character has so much spirit, determination, and hope wrapped up in a tiny package. She wants a better life for her and her pa, and she goes out and gets it. From humble beginnings in Missouri, she decides to move to the big city of Denver, stopping at the mining town of Leadville to earn some money as a waitress and singer. There she meets Johnny Brown (Tyson Forbes, tall and lanky with plenty of aw-shucks charm), who eventually woos her with the promise of riches as well as happiness. He delivers on both, but eventually it becomes obvious that they want different things in life. Johnny wants a simple life in Leadville with his friends, while Molly longs for riches and high society. It drives them apart, but Molly is a woman who doesn't stay down for long and always gets what she wants. And after she survives the great disaster, she decides she wants Johnny.

Maggie and Tyson make a most charming pair in one of the sweetest love stories I've seen in a while (the song "I'll Never Say No" is irresistible). But don't worry, it's not cloyingly sweet, these are two strong people who know what they want and don't always agree, but also love each other. The wonderful leads are backed by a fantastic ensemble who each play multiple characters and are all just a delight in each one. Highlights include H. Adam Harris as the genial bar owner, George Keller as Denver and European royalty, Eric Sharp as Molly's loving father, Austene Van as the friendly princess, Max Wojtanowicz as the nasal butler and charming prince, and the always entertaining Kimberly Richardson as a particularly snooty Denver socialite, who might just be hiding a bit more depth underneath it all. And as always in a TTT production, another character is the sound, even more so in a musical. The one and only Peter Vitale plays a banjo, a toy piano, and everything in between, and manages to create a full and complete soundscape for this world (with occasional support by Max on trombone). Like the music, the choreography (by Kimberly) is also simple and organic to the story, but ever so charming, including a delicious slow-mo fight scene, an intense wrestling scene, and a bit of party dancing.

Perhaps I should mention, for those of you unfamiliar with Ten Thousand Things (seriously, where have you been?), that in addition to paid performances at Open Book and other locations, they routinely tour their shows to prisons, homeless shelters, and community centers in the area. This requires them to travel light, literally and figuratively. Performances are in a small fully lit room with just a few rows of chairs creating a square on the floor where the magic happens. Actors look you in the eye from just a few feet away, or brush past your knees with swaying skirts, creating an intimacy and connection between audience and cast unlike any other. Set pieces are minimal and easily transportable, leading to some wonderfully creative choices. In this case, that means tiny furniture mounted on wavy poles, which the actors adorably lay a finger on to represent sitting. Costumes must also be minimal and easily transitioned between, and for this show range from drab rural clothing, to fashionably black, to European gold, and of course, Molly's red silk dress. (Sets by Stephen Mohring and costumes by Sonya Berlovitz.)

I'm quite certain that The Unsinkable Molly Brown is ruined for me as a musical now. If I ever see the typical full production of it, I might not even recognize it. But if I did, I'm sure it would pale in comparison to this sparsely lovely version that, like all TTT shows, strips away the unnecessary and serves us up a simple, unadorned, beautifully true story. See it for yourself - performances continue through March 8.