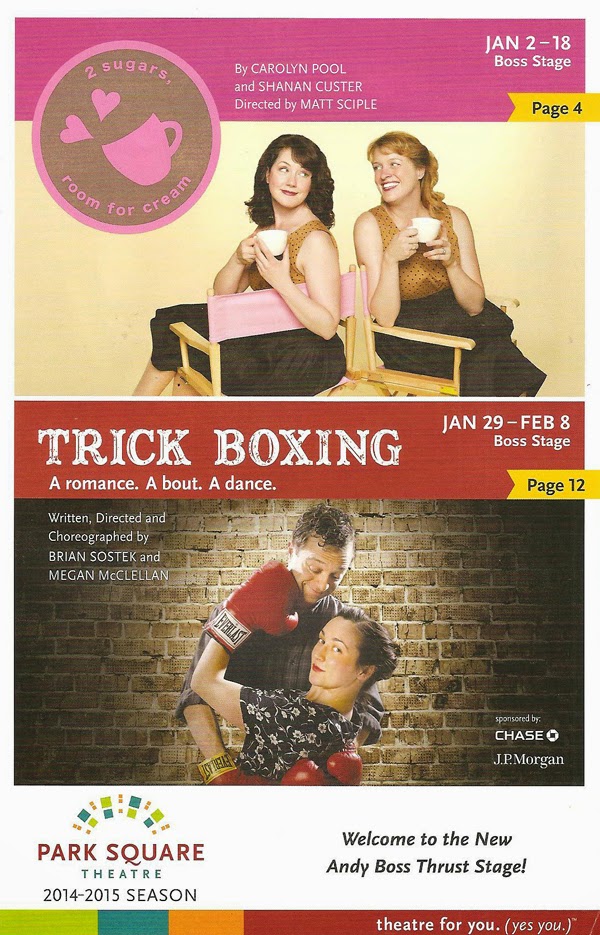 Husband and wife dancing duo Brian Sostek and Megan McClellan, aka Sossy Mechanics, has been touring their original dance/theater piece Trick Boxing for over ten years, performing it hundreds of times around the world. The years of experience have turned it into something flawlessly polished, but have not worn off the fresh and innovative feeling when viewing it, whether for the first, second (in my case, I saw it at the Guthrie a few years ago), or, one assumes, hundredth time. The original story centers on a boxing manager and the men he trains. Brian and Megan use every tool in their theater, dance, and storytelling toolboxes to tell this story in a delightfully charming way.

The storyteller guiding us through this little tale (set in the 1930s or 40s) is a gambler and boxing manager named Buck. He discovers a young immigrant who's fast on his feet and decides to turn him into a boxer and use him in a scheme. While training for his first match, Dancing Danny David wanders into a dancehall and meets Bella, whose brother Rocky was previously trained/used by Buck. She decides to help Danny get out from under Buck's thumb.

The two actor/dancers play about a dozen different characters in the story, with nothing more than a change of voice, accent, and body stance to distinguish them. Megan primarily plays the dancehall dancer with a heart of gold and Jersey accent. Brian plays Buck, Danny, Rocky, a scary evil gambler, the bookie, and several other people, each one a specific and distinct character. He often is on stage alone, having conversations with himself, the movement and words of one character flowing seamlessly into the other. It’s amazing to watch him switch back and forth between two characters, you can almost see the two sides simultaneously (like Stephen Colbert’s "Formidable Opponent," but without the benefit of a split screen). Scenes include a boxing training video, a radio spot, and the most graceful game of hopscotch I've ever seen (new for this incarnation of the show). In perhaps the most amusing scenes of the play, the boxing matches are represented by dolls in a tiny ring, with Brian voicing and moving the dolls as well as doing the play-by-play. But above all, there's the dancing. Whether it's Bella training her brother, or a demonstration of boxing moves, or Danny and Bella at the dancehall, it's truly a delight to see - fast and graceful and light and just gorgeous.


On certain nights, the show is followed by “Special Features” like you might find on a DVD, only live and interactive. Brian and Megan share deleted scenes, bloopers, history of the show, and adventures on the road as prompted by the audience. It sheds greater insight into the development of the show and the lives of this charming couple.


I love the art of dance, but I don't get the chance to see it very often due to my busy theater schedule. So I'm thrilled whenever dance makes its way into my theater world. It's a joyous experience to watch these two so effortlessly dance light-footed and light-hearted across the stage with each other, while telling this amusing and entertaining story. Trick Boxing continues at Park Square's Andy Boss stage through February 8.