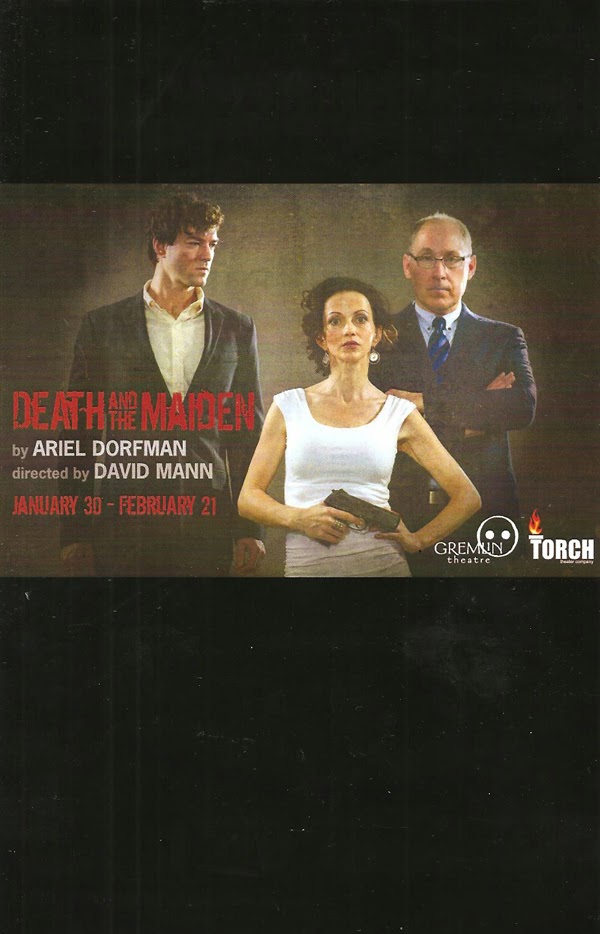 Often after going to the theater, there's one word that sticks in my head, that I then use probably too many times when writing about it. After seeing Death and the Maiden, that word is disturbing. This is not a light and happy show; it's dark, intense, thought-provoking, and beautifully done, as I've come to expect from Gremlin Theatre and Torch Theater. Death and the Maiden is the first of four collaborations between these two excellent small theater companies that have been around a while, all to be presented at the Minneapolis Theatre Garage* in 2015. Next up is Torch's Boeing Boeing in March, Gremlin's H2O in June, and another collaboration TBA. But first there is this dark and disturbing little play with an ambiguous ending.

The 1990 play Death and the Maiden takes place in an unnamed country "that has recently emerged from a long period of dictatorship," perhaps similar to playwright Ariel Dorfman's native Chile. Fifteen years earlier, Paulina was kidnapped, tortured, and raped, and spends most of her life hiding in her beach house with her husband Gerardo, who has recently been appointed to a commission to find and punish the people who committed atrocities during the dictatorship. But only those ending in death, so Paulina fears that her captors (whom she never saw due to a blindfold) will never come to justice. By chance meeting, a Dr. Miranda arrives at the beach house, and Paulina instantly recognizes his voice as one of the men responsible for her assault. She ties him up, holds a gun to his head, and puts him on trial. Gerardo doesn't believe his wife and defends Dr. Miranda. And it's unclear to the audience as well whether the doctor is the sadistic man who participated in countless atrocities against Paulina and others, or an innocent man falsely accused. All else being equal I tend to believe the woman, but there are just enough glimmers of uncertainty to leave me a bit unsure what, and whom, to believe.

Torch's and Gremlin's Artistic Directors Stacia Rice and Peter Christian Hansen, respectively, once again team up as the (not so) happy couple (see also Sea Marks), joined by Torch Associate Artistic Director Craig Johnson as Dr. Miranda. All three of these actors are among the best in the Twin Cities, performing on stages around town, and it's a joy to watch the three of them together. But that's the only joy found in this play. Remember, the word of the day is disturbing, and Craig embodies that in his performance of the seemingly nice and harmless doctor who may or may not be hiding a dark secret, with one particularly intense confession scene. Peter is the charming and supportive husband who wants to help his wife, but just can't seem to believe that this pleasant man is a monstor. But the show really belongs to Stacia as Paulina, in a performance that's raw, painful, and vulnerable, while still showing Paulina's fierce strength and determination to make this man pay so she can finally move on with her life. All of the interactions between these characters crackle with tension.

The lovely beachy set features designer Michael Hoover's clean lines, in cool shades of blue and tan. The peaceful surroundings are in sharp contrast to the turmoil of the story, both past and present.

Death and the Maiden continues through February 21 (discount tickets available on Goldstar). I can't say it's a fun play, and it doesn't wrap things up nicely, but it's worth your time to see these three talented actors tackle this meaty, thought-provoking, and yes, disturbing play.


*Last year plans were announced for a new residential and commercial building on the site of the Garage, with a new theater as part of the new space. I have not been able to find any updates on the project since then. But the Garage is a nice little venue, so I hope it sticks around in some form or another.