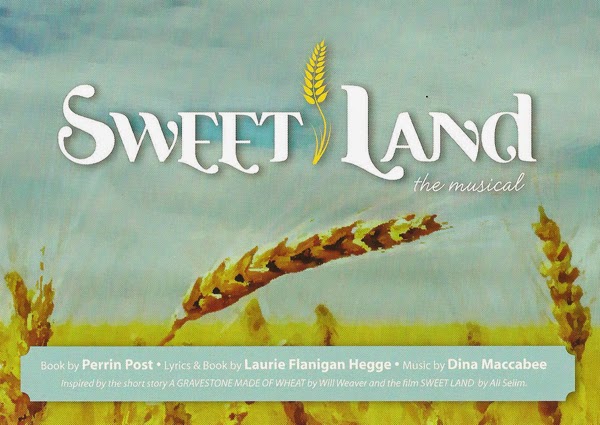 Every month, Nautilus Music-Theater presents an evening of new works of music-theater in their "Rough Cuts" series. It could be just a selection of songs, or an entire new piece. To kick off 2015, "Rough Cuts" is featuring an excerpt from the new musical Sweet Land, based on the Minnesota-made film of ten years ago. This musical by the mostly local team of Perrin Post (book), Laurie Flanigan Hegge (book and lyrics), and Dina Maccabee (music) has been in development for a number of years. I was lucky enough to attend a reading of the piece last spring, and was happy to see that it does the lovely little movie justice, retaining the beautiful story and sweet, funny, nostalgic tone, while adding new original folk/Americana music to create something new. It reminds me a little of the musical Once, also based on a lovely little movie, in that it's an intimate musical with overlapping cast and musicians, with the kind of music not typically heard on Broadway. Sweet Land is a gem that I look forward to seeing shine onstage someday after just a bit more polishing.

Last night in Nautilus' Lowertown studio (and tonight at the Walker Community Church in Minneapolis), two of the creators were on hand with five talented singer/actors and musical director Matt Riehle to present eight songs from the show, including two new ones, and get audience feedback. As brought to life by the one and only Ann Michels as Inge, Dieter Bierbrauer as Olaf (if you're going to replace Robert Berdahl, Dieter is a great choice, just don't make me choose between them!), Bradley Greenwald as Frandsen, Tod Peterson as the pastor, and Keri Rodau in the ensemble, the music sounds gorgeous and only makes me long to see the full piece again! Fortunately another full reading is coming this spring, with a larger cast and band, and the addition of movement by Brian Sostek and Megan McClellan*. Check out the Sweet Land the Musical website or become a fan on Facebook to find out more about when and where you can see what I called the most promising new work of 2014. You can also read more of my thoughts on the movie and musical here.


*You can see more Brian and Megan's inventive and delightful dance storytelling in their show Trick Boxing later this month at Park Square Theatre.