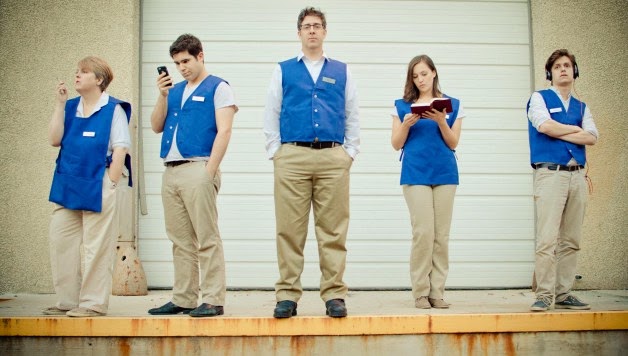 Loudmouth Collective is closing their third season with another show that is firmly in their wheelhouse of smart, deep, intense, often funny, always thought-provoking, small cast, beautifully directed and acted plays. I've been with them since the beginning, when the surprisingly sweet and touching Gruesome Playground Injuries landed on my favorites list that year. Since then they've done a couple of stellar one-man shows, an absurd comedy, and a Fringe show about talking cats. A Bright New Boise fits in well with that group of plays and helps to further define Loudmouth's point of view, one that's definitely worth paying attention to. It's a beautifully complex play, at times funny, at times utterly devastating, and completely engrossing. I know it's only mid-January, but this is by far the best thing I've seen so far this year.

A Bright New Boise takes place in the break room of a Hobby Lobby in, yes, Boise. It doesn't take long to learn that new employee Will has a reason for being there - to reunite with his teenage son Alex, given up for adoption when he was a baby. Will has other secrets in his past that are slowly revealed throughout the course of the play, and is facing a big crisis of faith after the rapture cult he belonged to ended in tragedy. He's a broken man, trying to figure out a new way of living and having trouble letting go of the past. Having grown up in foster care, Alex has troubles of his own and isn't so willing to let Will in. He slowly agrees to, but on his terms, and protective older brother Leroy is there to intercede if need be. Will meets a new friend in fellow employee Anna, who tries to get him to open up. All of this drama is happening under the supervision of Pauline, who just wants to make this the best Hobby Lobby it can be and is frustrated when her employees' issues get in the way of that.

This isn't a play with a happy ending or really any sort of closure. It just ends, and life goes on. It's the kind of play where you can easily imagine these characters' lives occurring before, after, and outside of the space of the play. They all have lives fully lived, the details of which are merely hinted at in some cases, but the feeling of which is heavily present. The world of the play is so completely engrossing that intermission came as a shock, jarring me back to reality after being completely in this world. The play is long enough that it probably needs an intermission, but I wish it didn't because the typical intermission chatter and phone-checking just distracted me from this world and these people I found so fascinating.

The tone that director Natalie Novacek has set for the piece is so perfect, and walks that line between comedy and intense drama so well. I especially love how the scenes are carried into the scene changes. As the lights darken, the characters remain in the moment for a few breaths, before slowly picking up and moving towards the next scene. Nothing is forced or rushed, but plays out in its own time, with beautiful moments of silence and awkwardness. Open Eye features an adorably tiny stage with an arch, and usually things take place under and in front of the arch. But in this case the break room set is set behind the arch, giving the impression of peering through a peep hole into this perfectly specific and well-defined diorama of a world.

This excellent cast is headlined by a beautifully subtle performance by Adam Whisner as Will. He's a quiet man with not a whole lot going on externally, but so much going on internally, all of it brilliantly conveyed by Adam in the hesitating way he speaks, the eye movements, the awkward way he moves around people. Will's past isn't fully explained until the end of the play, but it's clear from the moment we meet him that this is a man who's deeply damaged and lost. There's so much that's big and loud in theater, it's refreshingly lovely to see a performance that's so quiet but equally as dramatic and full of meaning.

The other star of the show is Spencer Harrison Levin as Alex. He's only a senior in high school (although a performing arts high school), but it's already obvious that he's a true talent. His performance as this troubled teen is so believable and natural, funny and heart-breaking. As Pauline, Karen Weise-Thompson is, as always, hilarious, providing much needed comic relief, but she also makes this woman who's proud of her work and her store real and not just a caricature. Rounding out the cast are Zach Garcia as Leroy and Anna Hickey as Anna, who also give great performances in these supporting roles.

Loudmouth Collective does consistently great work - smart choices, excellent casts, and cheap tickets - just $15 with special savings on some nights. The only thing I don't like about Loudmouth Collective is that they only do two shows a year with typically short runs. There are only eight performances of A Bright New Boise over two weekends. If you've never seen Loudmouth before, I highly recommend you check them out to see some smart, funny, thought-provoking, devastating, beautiful theater. This is the kind of show that will stay with you for a while.