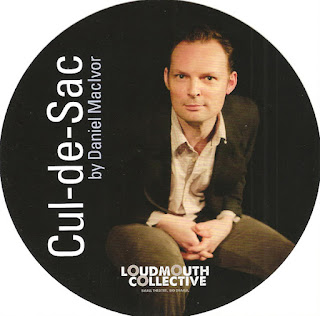 Loudmouth Collective is a new theater company that specializes in small ensemble or solo pieces. They open their second season with the latter - a solo play called Cul-de-Sac, featuring Wade A. Vaughn playing nine different characters. It's a bit of a murder mystery, but really the murder is an excuse to explore these characters, as each gets a chance to tell their own story. At a ticket price of $15 for a 90-minute show in an intimate space, featuring great writing and acting, it's a bargain and a new, cool, accessible kind of theater.

In Cul-de-Sac, Leonard tells his story from the other side - he has been murdered in his home. His neighbors add their perspectives of the story, as does his murderer. Leonard is a sympathetic character, as we hear differing opinions of him from his neighbors in addition to hearing his own truth directly from him. Playing all of these roles is Wade Vaughn, who made a great impression in last year's Ivey award-winning Compleat Female Stage Beauty. Anytime I've seen Wade on stage, it's almost like a one-man show; he commands the stage in a way that makes everything else fall away. Here, there is nothing else on stage with him - no furniture or costume changes, his only props are a lighter and a watch. He (with help from director Natalie Novacek) has created a specific physicality and voice for each of the characters, from a 13-year-old girl (who is complex in the way that only 13-year-old girls are complex) to an elderly man. Each one of them talks about their relationship with Leonard, but in doing so they convey something about themselves and their life. The writing creates a voice for each of them, and Wade gives them a physical presence. In one neighborhood party scene he slips back and forth between the characters at a dizzying speed. Watching him slip into and out of each one's skin is fascinating and compelling, as the 90 minutes fly by. The writing by Daniel MacIvor is at times beautiful, describing sound as a ball of energy that travels around a neighborhood, and comparing that to an old-fashioned letter traveling from sender to recipient through many hands. And it's funny too at times.

This is a sort run, eight performances only, and the next Loudmouth show is not until next January, so if you like your theater short and succinct, potent and poignant, raw and compelling, go check them out now while you can. (More information and reservations here.)