"On the Town" at Bloomington Civic Theatre 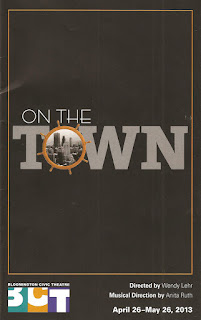 "New York, New York, it's a hell of a town!" How could I not love a show that includes that lyric? The 1944 Bernstein/Comden&Green/Robbins musical On the Town is a love letter to NYC as much as anything else. Three sailors on leave have a mere 24 hours in which to enjoy all the city has to offer, and they do their best. It's a light and happy musical, but it's also about enjoying the short time you're given (or as some might say, "no day but today"). As director Wendy Lehr notes in the playbill, "There is an underlying poignancy in all the high jinx." This is my second time seeing On the Town (Skylark Opera did it a few years ago), and already being familiar with the plot and music, I was really able to appreciate the funny and clever lyrics, crisply drawn characters, and of course, the amazing musical composition by Leonard Bernstein. I could definitely hear similarities to that other great Robbins/Bernstein collaboration. On the Town a great piece, a classic in musical theater history, and as usual, Bloomington Civic Theatre does a smashing job bringing it to life.

A quick plot review in case you've never seen the show (or have only seen the movie, which has significant changes of plot and music, as if one could improve on Bernstein!): Our three sailor heroes are the fun-loving skirt-chasing Ozzie, the organized and determined sightseer Chip, and the good guy Gabey, who only wants to find that one special girl. Find her he does, when he falls in love with a poster of Ivy Smith, Miss Turnstiles, on the subway. His two friends agree to give up their goals for the day (girls and sightseeing) to help their pal Gabey find Ivy. Since this is a musical, of course he does find her, but not without complications. In the end, a good time is had by all, and the boys get back on the ship, as a new batch of sailors land to spend their golden 24 hours in New York - a hell of a town.


BCT has recently made the transition from community theater to professional theater, which makes sense because they've been providing professional-level entertainment for years. They attract top professional talent (e.g., the aforementioned Wendy Lehr and Michael Matther Ferrel), added to the talent-in-residence of the always great Anita Ruth and Robin McIntyre's set design. Most of the actors have day jobs, but it's clear from their performances and from comments at post-show talk-backs that they love what they do. They bring that passion and joy to the stage and give it all to the audience. On the Town concludes the 2012-2013 musical theater season, with an exciting 2013-2014 season coming up that includes Singin' in the Rain, Les Miserables (for which they've hired two "professional" actors, William Gilness and one of my favorites, Dieter Bierbrauer, to lead the cast), 25th Annual Putnam County Spelling Bee, and Gypsy. (I think it's time to renew my season tickets!) If you're a musical theater fan who lives in the Southern Metro, you have no excuse not to go see a show at BCT. And if, like me, it's a bit of a drive to get all the way out to Bloomington, trust me - it's worth it. (On the Town playing now through May 26.)