"I Love to Eat" at Illusion Theater 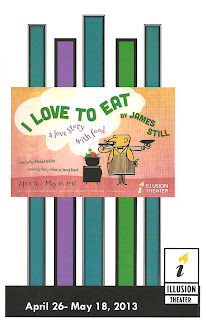 Everything I know about the culinary world I learned from watching Top Chef. The name James Beard is often heard on the show, in terms of the awards his Foundation bestows on promising chefs, but I never really knew much about the man himself. I'm not really what one would call a foodee; my favorite meal is a veggie burger, fries, and beer. But I do love to eat, as do most people, and we have that in common with James Beard, the subject of I Love to Eat: A Love Story with Food at the Illusion Theater. This one-man show, written by playwright James Still and directed by Michael Robins) is a sort of hallucination/dream/stream-of-consciousness in which James talks to us, the audience, telling stories about his life and love of food and cooking. Not much happens, but by the end of the 75-minute play, I had grown quite fond of this man who was a pioneer of American cookery.

The play consists of James in his kitchen telling stories, preparing food, reading letters from fans, and talking on one of three phones to fans or friends (including Julia Child). He is alone on stage, but you get the feeling that he craves connection, hence his generous contact with fans. We learn a little about his childhood in Portland (an ideal childhood is not necessarily a happy one), his travels, and his TV show. James hosted the first TV cooking show in the late 40s, and we see a few scenes from the show, talking to a cow puppet, the sponsor of the show. He makes his beloved onion sandwiches (with homemade mayonnaise), and a few lucky audience members get a taste! He focused on "every day American cookery" rather than pretentious fancy meals, encouraging his fans and students to use the preparation and eating of food to bring people together, as it has throughout human history.

Garry Geiken has shaved his beautiful head of hair to play James, and fully embodies not only his bald head but also his love of life, food, and connection. He moves in and out of the various scenarios (TV show, phone conversations, memories, reading letters) with ease. He has an infectious laugh and easy smile, but also gives us a sense of loneliness under the jolly exterior (it's impossible not to cry when you're chopping onions). He has the audience in the palm of his hand, as we dutifully repeat tips like "only fresh lemons always." The set, designed by Dean Holzman, is a detailed and homey kitchen that's slightly fantastical - the floor slopes towards the audience - giving the sense that this is not quite reality. The lighting (designed by Mike Wangen) tells us when we're entering the wacky world of the TV show.

James believed in "good food, simply cooked," and using the best ingredients. I Love to Eat is a theatrical meal James would approve of - the best ingredients combine in a story simply told. Sometimes sweet, sometimes bitter, but always tasty. The title says it all - he loved to eat, and he conveyed that love through his cooking and through his teaching. Like a good meal, you'll leave the theater feeling happy and satisfied. Playing now through May 18, with half-price tickets available on Goldstar.