"The Night of a Million Stars" at the Ordway McKnight Theatre 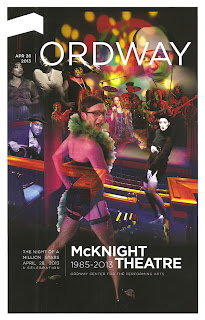 The Rocky Horror Show. Grey Gardens. Flower Drum Song. The Full Monty. Evita. 25th Annual Putnam County Spelling Bee. Mu Daiko. Company. The Broadway Songbook Series. These are some of the great memories I have from the Ordway's McKnight Theatre. It has been home to a lot of wonderful local musical theater, and I will miss it now that it's being demolished to make room for a new 1100 seat concert hall. But as was the case when the Guthrie left their original home, the history does not reside the building. It's in the people, the community, our shared memory of time spent together. And that will continue in another space. The Ordway's Artistic Director and amiable host of the McKnight's final celebration, James Rocco, said that he likes to think of the Twin Cities acting community as one big rep company, and I agree. That company will never perform in that space again, but it will continue. And one of my favorite memories of that space will always be Sunday night's warm and fuzzy celebration - The Night of a Million Stars!

I'm not going to give you a play-by-play, because that wouldn't even come close to describing the experience. You really had to be there. Like Peter Rothstein said (more on that a bit later), theater is an art form that isn't captured on a disc or tape, it only exists when artist and audience share a space together. I think that's why I write this blog, to try to capture my experiences at the theater and make them last a little longer, make something permanent out of it. But it's not, it's ephemeral. And that's the beauty of it.

There were over 40 performers on that stage, including a four-piece band led by Raymond Berg. Most were familiar to me, some beloved, and a few I'd never seen before. All were entertaining and complementary to the Ordway and James, and several brought him to tears with their love. It was a big, mushy, happy, bittersweet night. And it was long - over three hours, although it didn't feel that long to me. Most of the performances were from the 81 shows that have played in the McKnight, many with original cast-members. Scenes from the shows were displayed on a large screen at the back of the stage. These are a few of my favorite moments:


So farewell to the McKnight Theatre. The street just outside the theater is already blocked off so construction is sure to begin imminently, and will continue through 2015. But they really don't even need a wrecking crew - many of these performers could bring the house down on their own. There was so much talent on that stage I'm surprised it didn't collapse with the sheer weight of it! It was a fun night, a great celebration of local talent, and a nice way to say good-bye.