"This Side of Paradise" at the History Theatre 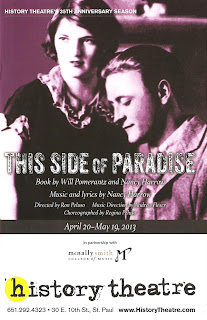 F. Scott Fitzgerald is one of Minnesota's most famous sons, and his relationship with his wife, the Southern belle Zelda Sayre, is the stuff of legend. They were young, beautiful, and famous - one of those celebrity couples like those we still obsess over today. But they were not happy, and both died in their 40s, separated from each other. This is the subject of the new jazz musical This Side of Paradise at The History Theatre. The title refers to Scott's first novel, which he wrote in part to convince Zelda that he could support her, and which did result in her agreeing to marry him. But this is really Zelda's story, and is told from Zelda's perspective later in life, when she was frequently hospitalized for mental illness, as she remembers her life with Scott. The music, written by jazz singer and composer Nancy Harrow originally as a song cycle, is fantastic, and I would love to see it performed as a song cycle. Nancy worked with playwright Will Pomerantz to fill in the spaces between the songs with scenes of the couple alone, with their friends, and with their only daughter Scottie. The piece is strongest when it focuses on Scott and Zelda, less so when it digresses into showy musical theater numbers that don't seem to fit. This is a story that might be better served by a quieter, simpler telling. But still, it's a powerful story with great performances and gorgeous music, about a couple that's still fascinating and impossible to figure out.

The play takes place in 1940, as Zelda talks to her doctor and remembers her life with Scott. We see the scenes play out with the younger Zelda as the older Zelda watches and sometimes participates, as if she's trying to relive the happy moments and save her younger self from some of the trauma she goes through. We see Scott and Zelda's first meeting in 1918, when she's a 17-year-old debutante and he a 21-year-old officer in the Army, stationed near her hometown in Alabama. They fall passionately in love, become engaged, and then Zelda breaks it off, afraid Scott can't support her with his short story writing. So he writes a novel, This Side of Paradise, and when it is published, they marry and began their tumultuous life together, in St. Paul, New York City, and Paris. Scott enjoys his success as an author, but Zelda struggles to find her own identity as an artist, whether through writing, painting, or dance (nicely represented onstage by Zelda constantly writing or painting a portrait of a dancer). As Act I ends, Zelda spirals further into mental illness. In a striking moment, both Zeldas and little Scottie twirl out of control as Zelda desperately cries, "Why can't I be happy?" In Act II, the two timelines converge and the present takes over from the past, which I found a little confusing. Scottie is all grown up and comes to visit her mother and make amends. Scott and Zelda, living apart for years, meet one last time, and he leaves again. The ending seemed to imply that Zelda makes peace with herself, but I'm not sure that she ever did, living in and out of psychiatric hospitals for the rest of her life until she died in a hospital fire. This is a tragic story with no happy ending.

The three leads are all excellent in their roles. Norah Long plays the older version of Zelda and Kendall Anne Thompson is the younger version. They are frequently onstage at the same time, and are quite believable as the same character. Kendall's Zelda goes from youthful confidence to desperation, while Norah's Zelda is a woman trying to make sense her life and holding on with her fingernails. Both sound gorgeous singing these beautiful jazzy songs. As Scott, Bradley Beahen is charismatic with a lovely voice, and has chemistry with both Zeldas (although I'm not sure why Zelda ages and Scott doesn't - typical double standard?). The ensemble cast gamely performs the dance numbers, which are entertaining even if they don't match the tone of the story. If one of the measures of the success of a musical is if the audience walks out humming or singing songs they've never heard before, then This Side of Paradise is a success. I couldn't stop humming "My Lost City" all through intermission, and went to sleep with "Until it Comes Up Love" stuck in my head.

The versatile set (by Rick Polenek) has the crisp white sterility of a hospital but also functions nicely for the flashback scenes. Director Ron Peluso makes good use of the set and the space, with some scenes taking place behind the windows, like almost-forgotten memories. Kathy Kohl has designed gorgeous period costumes that perfectly depict the "Jazz Age," a term coined by Scott to describe the life he and Zelda lived.

I love that the History Theatre gives me more insight into the history of my beloved home state of Minnesota. This is a fascinating chapter, and even though much of Scott and Zelda's story did not play out in Minnesota, we still claim them as our own. I also love when theater sparks my interest in a subject which leads me to further study, and this has certainly done that. Half of my time spent on this blog post was just reading more about Scott and Zelda's life together. I'd like to re-read Scott's most famous novel, The Great Gatsby (and see the soon to be released Baz Luhrman movie adaptation of it), and also read some of his other novels, especially Tender is the Night, and Zelda's counterpart, Save Me the Waltz, both largely taken from their life together. This Side of Paradise will give you a taste of Scott and Zelda's life in the Jazz Age, full of music, fashion, art, and tragedy. (Playing now through May 19, with discount tickets available on Goldstar.com).