"Broadway Songbook: The Words and Music of Cole Porter" at the Ordway McKnight Theatre 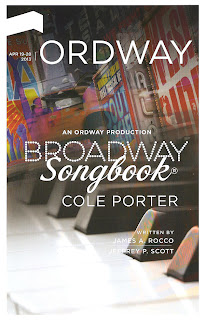 The final selection for the popular Broadway Songbook series this season at the Ordway is Cole Porter. I didn't think I knew that many of his songs; I've only seen one of the 28 Broadway musicals he wrote (Anything Goes, the Broadway touring production of which will soon stop at the Ordway). But Cole Porter is one of those great American composers whose songs you know even if you don't think you do. He wrote back in the day when songs from Broadway musicals crossed over to popular culture, and they've stayed there. Songs like "Let's Do It," "Don't Fence Me In," "You're the Top, "I Get a Kick Out of You," "Another Op'nin," and "I've Got You Under My Skin," all written for musicals, many of which have been forgotten, but the songs remain. Ordway Artistic Director James Rocco brings his usual charm and enthusiasm as host of the evening (or afternoon), sharing facts about Porter's life and career (at one point he exclaims in an aside, "this is my favorite part!"), and singing and hamming it up on a few songs himself. He's joined by Musical Director Raymond Berg on piano, who flawlessly keeps the show moving, and a cast of six local musical theater actors (Jennifer Baldwin Peden, Gary Briggle, Joshua James Campbell, Kersten Rodau, Kirby Trymucha-Duresky, and Regina Marie Williams), all of whom don't just sing these songs, they perform them. And they all look gorgeous - the women in silver and fuscia cocktail dresses and the men in tuxes. Cole Porter deserves this respect. The only thing missing is the champagne!

A few of my favorite parts:
This is the last production at the Ordway's McKnight Theatre before it is demolished to make way for a much larger concert hall for the St. Paul Chamber Orchestra. If you're as sad to see it go as I am, make plans to attend "The Night of a Million Stars" this coming Sunday evening. Not quite a million, but at least a few dozen stars will make their appearance! The Broadway Songbook series will continue next year on the main Ordway stage, which just doesn't have the intimacy and charm of the McKnight. But I'm sure they'll make it work somehow. In the meantime, "Broadway Songbook: The Words and Music of Cole Porter" continues for one more weekend, get your tickets now if you can!


*The multi-talented Josh Campbell will soon be directing "TO LIFE! A Benefit to End Gun Violence" at the Varsity Theater, an evening of music and theater featuring a great local cast, with proceeds going to Protect Minnesota. It's sure to be a fun evening for a great cause. Click here for more information and to purchase tickets.