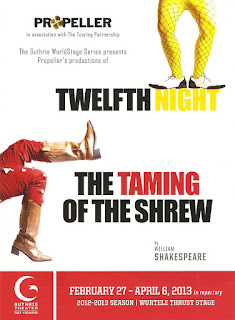 "If music be the food of love, play on!" So begin's Twelfth Night, the second Shakespeare comedy I saw this week. And to that I add - if Propeller Theatre Company be the spirit of Shakespeare, play on! As I've mentioned before, I sometimes have a hard time with Shakespeare, finding it difficult to get inside the language to where the story lives. But after this week I feel I have a new appreciation for the Bard. This all male touring Shakespearean company out of England does Shakespeare the way it was done in his day - with men playing even the female roles (but not in full drag, they still look like men, only in dresses and with a slightly higher pitch to the voice). Even though I've seen some fantastic Shakespeare productions here in America, there's something about hearing those words come from the mouths of actual British people using their natural accents (or close to it) that makes the language sound more natural. Shakespeare by Brits with men playing all the roles, just like how it was done 400 years ago. But everything else about Propeller's interpretation of Shakespeare is entirely modern - fast pacing, high energy, music, modern colorful costumes. It's some of the best Shakespeare I've seen.

Propeller is stopping at the Guthrie for six weeks as part of their international tour, doing two shows in repertory - the comedies Taming of the Shrew and Twelfth Night. I love the idea of a repertory company and rarely get a chance to experience it; it's so fascinating to see the same company of actors in two different plays just days apart. Both plays deal with relationships, and are sort of flip sides of the same coin. Twelfth Night is a story of sweet and pure love, of both the romantic and familial variety, while Taming of the Shrew explores a dark and dysfunctional love. Similar yet different, both are thoroughly enjoyable in their own way.

Taming of the Shrew:
I won't begin to try to summarize the plot (read Wiki for that). Suffice it to say there are two daughters of a wealthy man, the elder mean and disagreeable (the titular shrew), the younger sweet and lovely. But the younger cannot marry until the elder marries, a hopeless case by all accounts. Until a man named Petruchio comes to town and vows to tame her and make her his wife, leaving the younger sister's suitors free to scheme for her hand. And did I mention all of this happens in a play-within-a-play? A drunken common man named Christopher Sly is tricked into believing that he's a lord and the play is being put on for his benefit. The players begin tentatively with scripts, and then toss them aside and become immersed in the action of the play. The victim of the prank also takes part and plays the role of Petruchio (in a commanding performance by Vince Leigh). He is so awful to Katherine, emotionally and physically abusing her, that it's difficult to watch at times. Dan Wheeler as Katherine heart-breakingly transforms from a headstrong independent woman into a meek and broken thing, all the life drained out of her. When the play-within-a-play is over, Katherine wearily steps out of character, and all the players back away from Petruchio/Christopher Sly, as if he took their little prank too far. That alone makes the depiction of abuse bearable; this silly little tale is an allegory of power taken too far.

Twelfth Night:
One of those "or" plays, Twelfth Night; or, What You Will features the disguises and mistaken identities that Shakespeare loved so well. In this case, twins Viola (Joseph Chance) and Sebastian (Dan Wheeler again) are shipwrecked on the coast of Illyria, each believing the other has died and grieving for their beloved sibling. Viola disguises herself as a man named Cesario (who looks a lot like Sebastian), and becomes steward to the Duke, who is attempting to woo the fair Olivia (Ben Allen), who is herself grieving the death of her brother. The Duke sends Cesario to woo Olivia for him, and in doing so, Olivia falls in love with Cesario while Cesario/Violet falls in love with the Duke. Then Sebastian reappears, causing much confusion, which is understandable - I had a hard time telling the twins apart with their short blond hair and matching grey suits. As a man playing a woman disguised as a man, Joseph Chance gives us just a hint of Viola's womanly nature underneath her disguise. Ben Allen, who was a comic highlight in Taming of the Shrew as the crazy-costumed servant Biondello, gives a completely different but equally convincing performance here as the grieving woman who falls victim to love despite her best intentions. Leading us through this story is court jester/musician Feste, played by Irishman Liam O'Brien with his lovely brogue (which can also be heard as the servant Tranio in Taming of the Shrew, but disappearing when he transforms into his gentlemanly lord). And once again, the fool is actually the wise man.

Physicality:
I kept hearing about Propeller's "distinctive physical approach," so I was expecting the sort of physical theater that Live Action Set and Transatlantic Love Affair do so well. It wasn't that kind of physicality, in which the actors depict everything in the created world through the use of their bodies, but there were elements of that. The biggest piece of Propeller's physicality is the energy that the entire company gives to their characters, in the way that they move across the stage and interact with each other. Besides that, the physicality in Taming of the Shrew mostly takes the form of punching, but one of the highlights of Twelfth Night is a delightful garden scene in which company members portray everything from birds to statues.

Set:
The two shows share the same basic set pieces, with some slight changes of accessories. Two large wardrobes serve as doors to and from various locations, and a large column of drawers can also be tipped on its side to serve as a table. Twelfth Night also features a huge chandelier, and charming little trees for the garden scene.

Costumes:
The costumes create a distinct look for each show. In Taming of the Shrew, company members are dressed for a wedding, although their black tuxes with colorful shirts look more appropriate for a prom (do they have proms in England?). The rest of the costumes are a crazy mix of styles and eras, from Petruchio's cowboy boots and fringed jacket, to the distinguished garb of the lords. In Twelfth Night, company members wear dark suits and gray half masks, as they lurk about in the background of the scene, while the characters are dressed more conservatively and traditionally than in Shrew.

Music:
Both shows make great use of music. In Taming of the Shrew it's a sort of funky blues-rock, featuring sax, clarinet, electric guitar, and bass. The music in Twelfth Night is a little more folky, adding acoustic guitar, upright bass, and mandolin. Music is featured a bit more heavily in Twelfth Night, but Taming of the Shrew's second act opens with a clever and disturbing song about marriage. My favorite musical/dance moment is in Twelfth Night, when Gary Shelford's gentlewoman Maria takes center stage for a delightful solo dance. He's one of the tallest men on stage, but makes for a surprisingly graceful woman.

If you enjoy Shakespeare, or even if you don't, I recommend you head to the Guthrie between now and the first week of April to see what Shakespeare can be. If you're able to see both, it's great fun to compare the two and pick out favorites in one or both shows. If you can only see one, you have quite a dilemma on your hands. Twelfth Night is sweeter, with a bit of melancholy, and more music and dance, while Taming of the Shrew is darker. Hopefully I've given you a sense of each so you can decide for yourself, but like Doritos, it might not be possible to stop at just one. I'll leave you with a quote from Propeller Artistic Director and director of both plays, Edward Hall:


I think they make a very interesting match, in part because the idea of disguise revealing truth is relevant to both plays. A lot of disguising goes on in Shrew, which I wanted to do because it's a fascinating play about the power between the sexes, but also because Shakespeare is already exploring ideas about the nature of love that he develops in a much more sophisticated, ambiguous fashion in Twelfth Night. In Illyria, illusion and reality are almost indistinguishable. Dark and delightful, the play asks, "What happens when you fall in love with the wrong person?" and the answer is both beautiful and bittersweet.