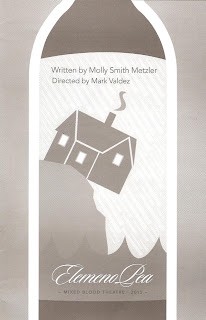 Elemeno Pea is a new play making its regional debut at Mixed Blood Theatre. It's a hilarious dark comedy, but like most of Mixed Blood's work, it runs a little deeper than that. It touches on issues of class, obscene wealth, family, and relationships. All of the characters are distinctly drawn by playwright Molly Smith Metzler and brilliantly brought to life by this cast of five. It's fast, sharp, and engrossing; the 95 minutes fly by as we get a real time look at one afternoon in these people's lives. And the title? It refers to a childhood trauma for one of the characters, who spent years thinking that LMNOP was one letter (say it fast, like in the song), and from that learned that things aren't always what we think they are.

Simone and Devon are sisters who grew up poor in Buffalo. Simone is now a highly paid assistant to a wealthy couple, and invites Devon for a weekend at the family estate in Martha's Vineyard. The only other person there is the groundskeeper Jose, whom the family calls Jos-B to differentiate him from their other employee, Jos-A. Michaela and Peter are supposed to be flying back to NYC, but Michaela shows up, nearly hysterical after Peter left her on the side of the road. She wants Devon to leave so that she and Simone can work all of this out, but Devon refuses to abandon her sister bonding weekend. Soon Peter's friend Ethan drops by, who also happens to be Simone's boyfriend. He and Michaela fight about Peter in front of Devon as if she's not even there. We eventually find out what's causing the rift between Michaela and Peter, and it's a devastating revelation. Through it all these five people argue, cajole, and joke, all of them exasperating at times but always very human.

Here's what LMNOP means to me:


Laughter: if you have a funny bone, this play will surely tickle it repeatedly.

Moving: several characters share some very personal and heart-felt truths that will make you like them more than you want to.

Nasty: pretty much everyone is mean and nasty to someone else at some point in the play, whether it's Jos-B talking about his employers behind their backs, or Michaela's rudeness towards Devon, or Simone's reaction to Michaela's crisis.

Outstanding cast: there is not a weak link in this five-person cast. Michaela seems shallow on the surface, but Laurine Price gives her depth and vulnerability. Grace Gealey is cool and hip as the aspiring Simone, and makes her choices seem right in character. Sun Mee Chomet is funny and entertaining as the fish-out-of-water Devon, but with her own depth of feeling and compassion. Ron Menzel completely commits to the born-with-a-silver-spoon-in-his-mouth Ethan, the one character devoid of depth, but all the more entertaining for it. Last but not least, Pedro Bayon provides much comic relief as the two-faced Jos-B, cursing his employers behind their backs while showering Michaela with artificial sweetness. Maybe it's because this is the end of the run, but the cast (directed by Mark Valdez) has gelled very well.

Pretentious: the rich people in this play fulfill just about every obnoxious stereotype of the super rich, but none more so than Ethan, who uses those annoying shortened words like "sich," "deets," and "convo" with no sense of irony, named his boats after himself, and complains that he didn't get to have his nap today.


I must also mention the beautiful and rich-looking set (by Richard Borgen), looking every much the cool beach-side guesthouse. But the best part is the sliding glass door to the patio, which we're told is sound-proof, allowing for several hilarious mimed arguments outside as the main action continues inside.

The show closes this weekend, so make your reservations now, or take a chance with Mixed Blood's "Radical Hospitality" program, in which you can get in for free if there are seats available. With this and other programs, Mixed Blood Theatre does a great job supporting their mission of pluralism, both in the audience and in the cast and crew. Through their productions and programs they strive for, and achieve, diversity in race, gender, class, sexual orientation, and physical ability, more so than any other theater I know. I've attended some post-show discussions, and they're among the best at really getting down to the issues in the play and engaging the audience in a great discussion. And they do good, entertaining, thought-provoking work, too. Check them out if you haven't yet.