"Courting Harry" at the History Theatre 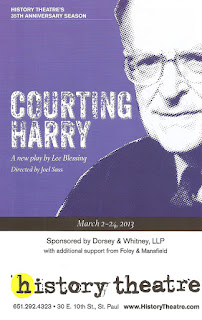 I have to admit, before seeing the world premiere play Courting Harry at the History Theatre, I was afraid that a play about a couple of Supreme Court Justices would be dry and boring. I was pleased to find out that it's anything but; it's actually an amusing, engaging, entertaining, and yes, educational play. Playwright Lee Blessing has framed the story of Minnesota-raised Harry Blackmun as a conversation between him, his childhood friend and Chief Justice Warren Burger, and the audience. This informal conversational style invites the audience into the lives of these powerful men who helped shape the laws of this country over several decades. Their most famous case is the landmark abortion decision Row v. Wade. Despite the fact that they both voted in the majority, it began a division in their friendship that was never mended. Courting Harry is both a historical play about a 40-year-old case that's still very much debated today, and a very personal story about a lifelong friendship.

Harry Blackmun was a bit of a pack rat - upon his death he left behind over 1500 boxes containing a half a million documents, both personal and professional. The stage at the History Theatre is filled with boxes overflowing huge shelves. Harry (the charming and natural Clyde Lund) begins to tell his story to the audience and is interrupted by Warren (a suitably gruff Nathanial Fuller), a sort of afterlife conversation. Four researchers in white coats (Jamila Anderson, Charlotte Calvert, Sam Pearson, and E.J. Subkoviak) sift through the documents making notes, pulling out pertinent letters and reading from them to support the story. It's very well-choreographed and a clever way to add interest to the story and make it more than just two people talking in an empty room. We meet a few other characters played by the ensemble, including Harry's mother and daughter, and presidents Nixon and Clinton (very entertainingly portrayed by E.J. Subkoviak, who has graduated from playing Nixon's campaign manager last year in 1968 to the man himself). When Harry is appointed to the Supreme Court, everyone puts on a black robe to illustrate that part of the story, with justices coming and going through the years like a game of musical chairs. Remaining constant through it all are Harry and Warren, growing further and further apart, until they, too, move on.

As someone who does not enjoy politics, I'm impressed that playwright Lee Blessing, director Joel Sass (who also designed the simple and stately set, as per usual), and the cast have managed to make a play about politics and the law so engaging and relatable and human. But I shouldn't be surprised; the History Theatre has a knack for telling important stories about Minnesota and American history that entertain as much as they inform. I don't know why I never learned about Harry Blackmun in history or civics class (or maybe I did and I just don't remember), but I know about him now and I won't soon forget, proving once again that everything I know I learned from theater. There is a renewed effort to place a bust of Harry Blackmun in Minnesota's State Capitol, as a famous son of Minnesota who achieved much on the national scene, including being an advocate for women's rights. Contact your local representative if you agree, and head to the History Theatre between now and March 24 to find out more about the life of Minnesota's Supreme Court Justices. I promise, it's much more fun than it sounds. (Discount tickets available on Goldstar.com)