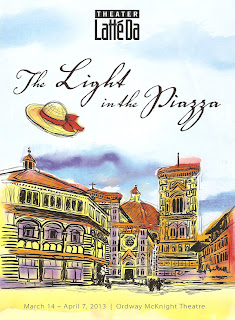 Theater Latte Da's new production of The Light in the Piazza is an absolute dream of a musical. From the moment the first chord was struck by the five-piece onstage orchestra, it cast a spell on me from which I hoped I would never awaken. The 2005 multiple Tony-winning musical* features a stunningly gorgeous score (written by Adam Guettel, grandson of Richard Rodgers of Rodgers and Hammerstein), and a beautifully romantic story, with a twist. Theater Latte Da's production is fairly straight-forward and simple, allowing the beauty of the piece to shine through. Even though it's a new musical, there something about it that feels classic and timeless. I was moved to tears on several occasions by the music, brought to vivid life by the talented ensemble of musicians and actors.

Light in the Piazza is based on a novella of the same name, and tells the story of a woman named Margaret and her daughter Clara travelling to Italy in the 1950s, a place Margaret hasn't visited since her honeymoon with her now-distant (geographically and emotionally) husband. Clara meets a local boy named Fabrizio and falls in love. Margaret has dedicated her life to protecting her daughter, for reasons that become clear as the story unfolds, but begins to see that perhaps it's time to let Clara grow up in her own way. We also meet Fabrizio's complicated family. This is a story about many kinds of love, Clara and Fabrizio's innocent and sweet new love, the complicated love of several married couples, and perhaps most touching of all, the love between a mother and daughter whose lives have revolved around each other for years.

In characteristic Latte Da style the show is perfectly cast. Jessica Fredrickson's lovely voice is perfectly suited to Clara, and she brings a charming innocence to the character. Kathleen Humphrey creates a complex and layered character in Margaret; her struggles to do right by her daughter are heart-breakingly evident in her face. Aleks Knezevich is charming as the young and in love Fabrizio, and his gorgeous voice almost made me forget that Matthew Morrison originated the role on Broadway. Jessica and Aleks have a believable and beautiful chemistry, not surprising since they are engaged in real life (could they be any cuter?), and they sound incredible together on these sweeping love songs. Everyone in the small ensemble is great in their multiple roles, as they populate the city of Florence with any number of characters strolling through the piazza, often speaking in Italian. Standouts include Erin Capello as Fabrizio's unhappy and jaded sister-in-law Franca, in stark contrast to the naive Clara, and Bill Scharpen as Fabrizio's elegant father who spends a lot of time with Margaret as their children are getting to know one another.

The music of The Light in the Piazza is something quite special. I remember reading that Adam Guettel first composes all of the music, then goes back and adds lyrics where necessary. Several of the songs are sung party or entirely in Italian, and unlike at the opera, there is no English translation available. But with music this emotional and expressive, you don't need to know exactly what Fabrizio is saying in "Il Mondo Era Vuoto" to understand what he's feeling. Some of the singing is neither English nor Italian, just a wordless singing that is pure musical expression, as in the touching love song "Say It Somehow." Fabrizio and Clara don't speak the same language, but somehow they understand each other. Similarly, the audience doesn't need to have the words spelled out to understand the emotion of the scene. The five-piece orchestra (directed by Denise Prosek) is much smaller that the original Broadway production; it has been stripped down to the essentials - piano, violin, cello, bass, and harp (harp!). In the intimate space of the Ordway McKnight Theatre, it's just right.

The stage of the McKnight Theatre has been transformed into a picturesque representation of the Italian city of Florence by scenic designer Rick Polenek. Two dimensional cardboard cutouts of famous buildings and statues stand in the background, moved around by ensemble members. They almost look like illustrations in a book, which adds to the feeling that we're inside a fairy tale. The costumes (by Rich Hamson) are pure perfection. The women wear a parade of 50s style dresses, complete with full skirts with tulle, and matching hats, gloves, shoes, and purses. The men are in smart suits with hats. The showpiece is Clara's perfectly lovely tea-length wedding dress (spoiler alert), and the final scene is like a beautiful painting.

As Margaret sings in the final number, love may be a "Fable," but The Light in the Piazza makes you believe. It's a wistful, dreamy, romantic fairy tale. But it's not all sweetness and light, there's enough harsh reality to keep you grounded. It's a fitting conclusion to what has been another wonderful season for Peter Rothstein and Theater Latte Da. It began with Sondheim's Company last fall, which, despite being 40 years old, felt like a contemporary and often cynical look at modern marriage. Then came Aida, a big spectacular Broadway-style rock musical. The Light in the Piazza is a gorgeous new musical that feels like a classic. This season has displayed a really nice variety that showcases Latte Da's talent at bringing musical theater to life.

Go see this gorgeous new classic, playing now through April 7, and like me, you will leave the theater singing, "now is... I am... happiness!"

*Light in the Piazza won six Tony Awards in 2005 (including best score), but was beat out for best musical by Spamalot, which I'm coincidentally seeing today. (Update: Spamalot is great fun, but doesn't compare to beauty of this piece.)