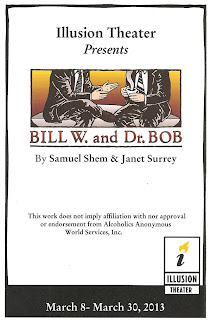 Bill W. and Dr. Bob is the story of the founders of Alcoholics Anonymous, but it's also about the friendship between two men who quite literally saved each other's lives, as well the lives of countless others. It's fairly well accepted today that alcoholism is a disease, but in the 1930s when Bill Wilson and Dr. Bob Smith began their program that became known as AA, alcoholics were just drunks who threw their lives away, to the frustration of those who cared about them. Bill and Dr. Bob were both pretty serious alcoholics, on the road to self-destruction, when a chance meeting brought them together. They began a lifelong friendship as well as a movement that has grown to over two million members.

The play begins and ends as an AA meeting ("Hello, my name is Bill W., and I'm an alcoholic"). Bill and Dr. Bob tell their stories, and we flash back to watch their lives play out. Before they meet, the two men lead parallel lives. Both are successful professionals from Vermont whose lives and careers are damaged by drinking, and both have supportive but frustrated wives who suffer because of their husbands' habits. The first act of the play shows us these parallel lives, as similar scenes are played out on opposite sides of the stage in each man's life. The women beg their husbands to quit drinking, they promise to do so, and then go back to their self-destructive ways. Both become involved with a Christian movement called The Oxford Group. With the group's help, Bill is able to stop drinking, but Dr. Bob is a reluctant attendee of the meetings, dragged there by his wife. Bill travels to Akron Ohio on business, and when that business fails, he feels a relapse coming. He reaches out to the local Oxford Group, and is eventually introduced to Dr. Bob. The first act ends with a powerful scene of the two men sharing their similar stories and listening to each other. In the play's second act, Bill moves in with Bob and his wife and helps him get sober. They then decide to try their method on others, and scour Akron for an appropriate drunk. After several failed attempts, they achieve success, and a movement is born. The key to the solution is "talking to another drunk," sharing one's personal experience with someone who understands. Simple really; isn't that what everyone wants, alcoholic or not?

The fantastic six-person cast is led by Jim Cunningham and Stephen D'Ambrose as the title characters. Jim is very charismatic as the determined Bill; it's one of those performances that ceases to feel like a performance by the end of the play - he is Bill. Stephen is appropriately crotchety as Dr. Bob, who finally opens up to Bill, this stranger he's just met. Bill and Bob make a great team, as do Jim and Stephen. As the wives of these two men, Carolyn Pool and Laura Esping illustrate the destructive nature of the disease in terms of family. Your heart breaks for them as they try to help the men they love and can no longer recognize. Rounding out the cast are Kate Guentzel and Michael Paul Levin playing every other character in the world of the play. Kate has some humorous and entertaining moments as everyone from a barmaid to the leader of the Oxford Group. I lost count of how many characters Michael plays, each a distinct character with a different accent and wardrobe, often with a quick change in between.

A really nice feature of this production is the music. Roberta Carlson plays piano between and during scenes, reminiscent of when they used to have piano players in movie theaters. It's not a necessary thing, they could have played recorded music during scene transitions as is often done, but it's a nice touch. Live music makes everything better.

Unfortunately I caught this one at the end of its run - it closes tonight, so if you haven't seen it yet you have one more chance. (Unless you live near Blue Earth, Brainerd, or Fergus Falls, then you can still catch it on tour in April.) I've only recently discovered Illusion Theater, but I have not been disappointed by anything I've seen there. If you missed this one, their next play is another story of an American pioneer - chef James Beard in I Love to Eat: A Love Story with Food.