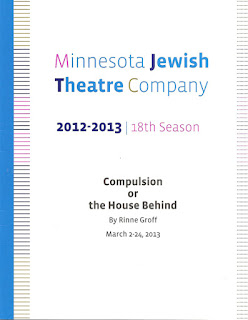 Compulsion or the House Behind tells the story of a man obsessed with Anne Frank's story, and making sure her story was heard throughout the world. I've been on a bit of an Anne Frank journey myself recently, although a little less obsessively. Last fall I saw Yellow Tree Theatre's moving production of The Diary of Anne Frank, based on the 1997 revision of the original 1955 play by Frances Goodrich and Albert Hackett (more on that a bit later). After seeing the play I was compelled to read the book, and was struck by what a normal teenager Anne was, despite the unthinkable situation she found herself in, as well as how she was able to keep her faith in the goodness of the universe. Earlier this year Nautilus Music-Theater presented a beautiful musical rendition of the diary, I Am Anne Frank, which adds another layer of richness to the story in a way that only music can. Compulsion or the House Behind by Minnesota Jewish Theatre Company adds yet another layer to the complicated story. Or rather, the story of how this simple diary became the legend that we know today.

Compulsion or the House Behind is a new play by Rinne Groff (the 2010 Public Theater production starred Mandy Patinkin, whom I adore) based on the life of Jewish American writer Meyer Levin. He traveled to Europe at the end of WWII and witnessed the liberation of the concentration camps, which began his obsession with getting the story of the Holocaust told. But he felt that the best person to tell the story was someone who had lived it; "from among themselves a teller must arise." When his wife gave him a French language translation of Anne Frank's diary, he knew he had found the teller. He worked with Anne's father, Otto Frank, to get the diary published in English in 1952, and wrote the New York Times review of the book. He had a verbal agreement with Frank and the publishers to write the stage adaptation, but his version was ultimately rejected in favor of the version written by Goodrich and Hackett. Their version downplayed Anne's Judaism and stressed the universality of the story, in order to make it more accessible to a wider audience (typical Broadway - compromise to sell more tickets). And it worked; the play won the Tony Award and Pulitzer Prize and became a huge hit that's still being produced today. Unfortunately Levin's version, which is more a story of the Jewish people and their survival, cannot be bought or produced due to an agreement he signed after a prolonged legal battle. But despite this settlement, Levin could never let Anne go; it became a lifelong obsession.

In the play, Meyer Levin is represented by Sid Silver, beautifully portrayed by Mark Benninghofen, capturing his early enthusiasm and naivete, through his later obsession, aggression, and delusion. Bethany Ford wonderfully creates two distinct characters (with the aid of her beautiful period costumes by Lisa Conley) - a young publisher named Miss Mermin, who is first Sid's supporter and then his adversary, and Sid's supportive French wife, who eventually demands that he drop the lawsuits and let go of Anne, for the sake of their family. Matt Rein ably plays all of the other characters - various lawyers and publishers in Sid's way (as one woman in the post-show discussion told him, "you were such an idiot!"), as well as Sid's friend in Israel who helped him (illegally) produce the play years later. With the multiple characters, there are a few winking comments of "you look familiar" or "you remind me of someone." An audience is often asked to accept one actor portraying several different characters, so I appreciate the acknowledgment of this suspension of disbelief.

The tight three-person cast works well together (directed by Hayley Finn), but there's another very important person onstage. Anne herself is represented by a marionette and appears to both Sid and his wife, as if in a dream. She's adorable and incredibly expressive (designed by Chris Lutter-Gardella) and really is like a fourth actor in the play. Like all marionettes, she's so lifelike, and slightly creepy because of that. You can see the strings, and the person pulling the strings (very artfully done by Janaki Ranpura), but the puppet seems to have a life and feelings of its own. Particularly effective is the scene in which Anne shows up in the Silvers' bed and speaks to Mrs. Silver, in the voice of a sleeping Mr. Silver. It's a very clever device by the playwright to bring Anne into the story and let her voice be heard.

One of the great things about this play is that it raises questions but doesn't offer easy answers. No character is all bad or good. As an audience member, I definitely sympathized with Sid and wanted things to go his way, but also found myself frustrated at some of his actions. This is a complex portrait of a man whose good intentions to make an important story heard became an unhealthy obsession, believing he was the only person who could tell that story. But the truth is Anne's story didn't belong to him, it didn't belong to Goodrich and Hacket, it didn't even belong to Otto Frank. It's Anne's alone, which she left behind for each of us to experience in our own way. In the post-show discussion the day I attended, one audience member, who had worked with Holocaust survivors, very eloquently spoke about how the horror of the Holocaust is something that's difficult for those of us who haven't lived through it to comprehend. That level of cruelty is so far beyond what most of us can even imagine that it's difficult to wrap our minds around it. Maybe that's why Anne's story is so popular. She struggled to understand it herself, and she was living it. Anne gives us a tiny window into that horrific world, one simple story that we can grasp and put a face on the faceless and nameless millions.


It's really a wonder that I haven't dropped all my ideals, because they seem so absurd and impossible to carry out. Yet I keep them, because in spite of everything, I still believe that people are really good at heart.

Compulsion or the House Behind is playing for two more weekends at the Hillcrest Center on Ford Parkway in St. Paul. It's a fascinating, compelling, and thought-provoking look at the story behind a very familiar story.