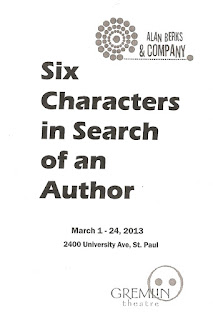 I must confess, I'm a reality show junkie. But only the good ones - competition shows like Survivor, The Amazing Race, Project Runway, Top Chef (congratulations Kristen!), American Idol, and Dancing with the Stars (my pick for the new season - Dorothy Hamill and Tristan!). I love these shows, but I'm very aware that they're a heightened and manipulated version of "reality." So when Alan Berks & Company's Six Characters in Search of an Author started out as a clever spoof of a reality show, I was in familiar territory. But soon the play took an unexpected turn into something much darker and deeper, a surreal exploration of reality vs. fiction and the creative process. Not what I was expecting, but a fascinating ride.

Director Alan Berks and his talented company of actors have created a new adaptation of the 1921 Italian play of the same name, in which six people appear during the rehearsal of a play, saying they're characters from an unfinished story, searching for a new author. In this version, the play rehearsal has been replaced by a reality show called The Maze, in which contestants live in a mansion, searching for a key that will lead them to the hidden treasure (a show I might watch). Three contestants remain, with convenient reality show labels (and bearing the actors' real names) - the jerk Sam (Landman, so brilliant in Thom Pain a few months ago), the flirt Rachel (Finch, the highlight of Theatre in the Round's recent Rabbit Hole), and the dude Michael (Terell Brown, a standout in Theatre Coup d'Etat's Angels in America last summer). Along with the weary cameraman Joe (Weiner, who ably handles the camera as we view the footage live) and hotshot young producer Bryan (Porter*), they settle in for another day of trying to make something interesting happen. And boy, does it.

The six characters drop in from a story all their own, fully formed, aching to complete their story but forever stuck within it. There's a stern father (John Middleton), a grieving mother (Colleen Barrett), a neglected son (Max Wojtanowicz*), a rebellious stepdaughter (ShaVunda Horsley), and two young children (creepily represented by white garden statues). To say they're a dysfunctional family is an understatement. They tell their story in pieces, each one interrupting and contradicting the others. Producer Bryan begins to think there's a story here, and agrees to tell it on The Maze. He gets his contestants to act out the scenes, in the house and via confessional (that reality show staple). But the characters are not happy with this depiction, and insist on telling their story to it's final and terrible conclusion.

The use of video in this play is unlike anything I've seen on stage. We see the action play out from the production room in the house, full of cameras, monitors, and wires, with just a bit of the actual house visible through the glass door in the back wall. Two monitors show live feed of the kitchen and entry way, just on the other side of that wall. Another monitor shows either taped footage of other areas of the house (bedrooms, hallways, the pool) or live feed from the camera as Joe films what's going on right in front of us. It's a lot to take in, you're never quite sure where to look, but it shows the audience several different perspectives of what's happening, and adds another layer to that reality/truth conundrum.

Six Characters is a weird, trippy experience, one that's difficult to explain or make sense of. But it sure is fun to try. What is reality? What is fiction? And what lies in between? (Reality shows, and maybe theater too.) It's a really clever new adaptation of a classic play. The cast is so talented (the reality show cast so natural, the "characters" appropriately dramatic) that it's fun to watch them play; the only problem is it's impossible to watch all of them at the same time. Add in the innovative use of video, and you have a unique and entertaining evening at the theater. The Six Characters continue searching for an author at Gremlin Theatre** through March 24. (Discount tickets available on Goldstar.com.)

*I was quite tickled when I realized that this play brings together two Cliffs from Cabaret - Bryan from the recent BCT production, and Max from Frank Theatre's production two years ago.
**Gremlin Theatre is losing their current space on University in St. Paul, and are looking for a new space. They will produce one last show there in June. I'll be sad to see it go. It's a nice space (that also hosted Fringe Festival shows) in an easy location with free parking. But I've really come to appreciate the Gremlin's work, so I'll follow them wherever they go.