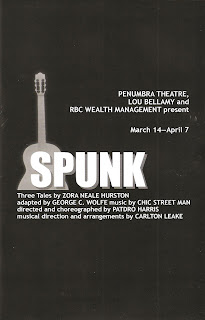 Great news, my theater-loving friends - Penumbra is back!! One of the nation's top African-American theater companies (they've produced more August Wilson plays than anyone else), which also happens to be one of the Twin Cities best theaters, closed their doors last fall due to a financial crisis. After some serious fundraising and support from over 1400 individuals, corporations, and foundations, they've been able to resume their business of telling good stories well. First up: Spunk, an adaptation of three short stories by Zora Neale Hurston (most famous for writing the novel Their Eyes Were Watching God). The three stories are woven together by music, in the key of the blues. The incomparable Jevetta Steele is the singing storyteller, accompanied by the smooth Dennis Spears as the guitar man. They narrate the stories as the four "folk" act them out. It's a mostly happy, uplifting, celebratory show, but with a little bit of the heartbreak of the hard-working African-American communities Hurston brought to life in her work. One of the pieces takes place in Harlem, the other two in the hot Florida summer, and the heat coming off the stage almost makes one forget that winter still has its hold on us here in the frozen Midwest.

The first story is the darkest - a washerwoman (the busy and talented Austene Van) with a snake of a husband (an imposing Keith Jamal Downing), until his bad karma comes back to bite him (literally). The second story is the lightest - two pimps (i.e., gigolos, hilariously played by T. Mychael Rambo and Mikell Sapp in bright-colored pin-striped suits) vie for the attention of a fancy lady who wants nothing to do with them. The last story is both hard and hopeful - a seemingly happy couple hits a road block and then tries to make their way back to each other. Austene and Keith again play the couple, and their journey from sweetness and love, to distance, to tentative connection is a pleasure to watch.

The original music (by Chic Street Man, from the original 1989 production) is as integral to Spunk as its characters. The narrators sing between and during the stories (I particularly enjoyed a playful duet between scenes), and the characters also sing for themselves. I wouldn't call it a musical, but the music comes out of the emotions of the scene in an organic way. There isn't really structured dancing, but there's a definite sense of movement with the music and emotions (Patdro Harris directs and choreographs). The costumes (by Amanda McGee) are fun and colorful (Jevetta steals the show in purple layers and fur). The multi-leveled rustic set (by C. Lance Brockman) makes clever use of the space.

Spunk is a great comeback for Penumbra. Fun, playful, real, with great music and a lot of heart. If you've never visited their lovely space in St. Paul, I highly recommend you check it out, starting with this show. Spunk plays now through April 7 - exchange your winter blues for a much more satisfying kind of blues.