"Spamalot" at the Orpheum Theatre 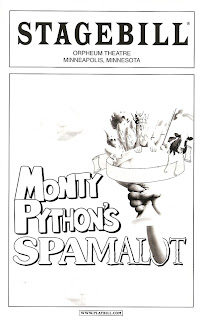 Before there was The Book of Mormon, there was Spamalot. A hilariously irreverent musical that makes fun of the form while staying true to it, to great critical and audience acclaim. Spamalot is great fun, but it doesn't have the joyous heart that shines through the profanity of The Book of Mormon. I saw Spamalot on Broadway in 2005, when it won the Tony for best musical over another multi-nominated original musical, The Light in the Piazza. I saw Theater Latte Da's gorgeous production of The Light in the Piazza just a few nights ago, and the two really don't even compare. I don't think Spamalot will go down in the history books as one of the best musicals of its time, but I'm certain Light in the Piazza will. No matter, Spamalot isn't trying to be anything profound, just entertain its audience. And that it did with rousing success. This national tour by Pheonix Entertainment make a quick stop in Minneapolis for three performances in two days, so if you missed it, you're out of luck. Go see The Light in the Piazza instead.

Since I've got another matinee tomorrow, let me get right to the point: