"Yellow Fever" by Mu Performing Arts at the Guthrie Theater 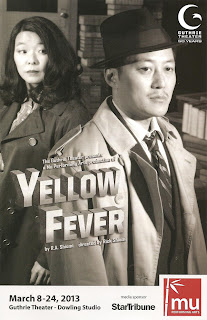 Thirty years after its debut, Rick Shiomi's play Yellow Fever is being produced in the Guthrie Studio Theater, as part of Rick's final year as Artistic Director of Mu Performing Arts, one of the largest Asian-American theater companies in the country (the multi-talented Randy Reyes will be taking over as Artistic Director at the end of this season). Yellow Fever is part classic noir detective story, and part exploration of racism in Canada a few decades after the internment of Japanese-Canadians during World War II. It's like a Japanese-Canadian version of Guy Noir, Private Eye, but with more serious undertones behind the mystery, drama, and romance. And like many crime/mystery TV shows, the actual mystery is less interesting than how the characters go about solving it and their interaction along the way, as well as the implications of the truth that eventually comes out.

The setting: March 1973, Powell Street in Vancouver. Sam Shikaze, P.I., is the main character and narrator of this tale - divorced, middle-aged, a loner and workaholic. He spends most of his time in his shabby office, helping out the locals, and in Rosie's tea shop. When the newly crowned Cherry Blossom Queen is kidnapped, he's on the case, and soon learns that it's more than just a simple kidnapping. Helping him out is his old buddy Chuck Chan, a suave downtown lawyer in beautiful suits, and spunky reporter Nancy Wing. Sam's frenemy, police Captain Kadota (Sam flunked out of the academy and stayed in the neighborhood, while Kadota moved out and up) and a couple of crooked cops complete the characters in this distinctly drawn universe.

This strong cast is led by Kurt Kwan, who perfectly portrays the classic noir detective in all his world-weariness. Sara Ochs is delightful as Nancy, a strong independent woman who tries to break through Sam's tough veneer, and Alex Galick is charming as the smooth player Chuck. Wade A. Vaughn, star of last year's Ivey-winning Compleat Female Stage Beauty, is completely unrecognizable as the elderly Japanese expert Goldberg. But as Superintendent Jameson, leader of the Sons of the Western Guard (Canada's version of the KKK), he has that familiar compelling stage presence.

The set (by Joseph Stanley) and lighting (by Karin Olson) do wonders in creating the 1970s noir feeling. Sam's sparse office is detailed and authentic, and Rosie's tea shop looks homey and comforting. Lighting changes signify time of day or mood, whether it's streetlights shining through the blinds, or the lowered lighting every time Sam does his noir-ish narration.

Yellow Fever works on several levels - as an entertaining homage to noir detective stories of old, complete with clever witty lines and those classic characters. But it also explores the effects of Japanese interment that wasn't that long ago in our history, and extended beyond the U.S. to our neighbors in the north (a fact previously unbeknownst to me). It's what Mu does best - Asian-American (or Canadian, in this case) theater that appeals to everyone because it's really about our shared history and experience. There are many reasons to go to the Guthrie right now, and Yellow Fever is one of them.